At the start of the season i set myself a goal of spending fifty days on the slopes. I thought this was achievable given the season lasts roughly six months when including the higher level resorts, meaning an average of two days riding a week. I also wanted to explore more resorts and ride more off piste terrain. So, how did it go?

By mid October it didn’t look like there was going to be any snow for the season start, although there had been so much rain over the summer that the high level resorts probably already had a base. In the third week, a few days before the season began, the powder arrived. These were the conditions at Glacier 3000 (at yes, approx 3000m): 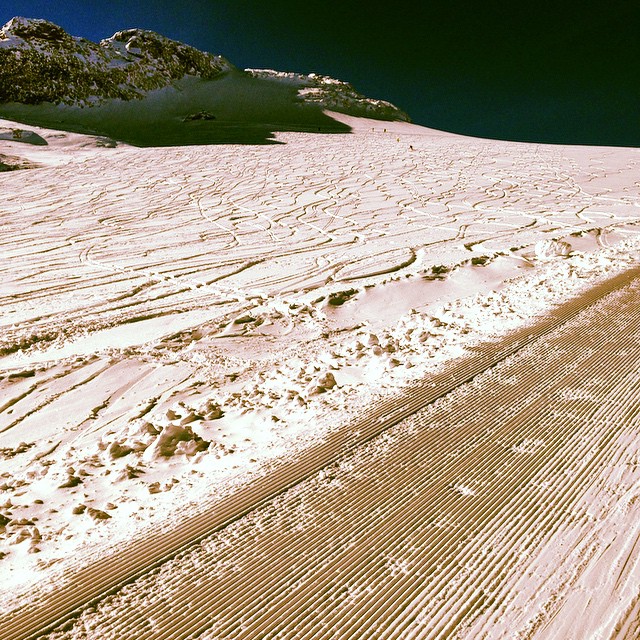 What was interesting to observe at Glacier 3000 was just how busy it would get despite being very early in the season. There are only t-bars on the glacier, which are slow and of limited capacity; by 10am the lines were very long. I guess everyone was eager to get back on the pistes.

The good snow conditions continued into November and i decided to go a little further afield. I spent a day at Saas-Fee, where the off piste powder was waist deep and most of the high pistes were open. I also spent a day at Verbier the week after, which had several mid level pistes open and decent coverage. However as you can see from the photo below off piste riding was not advisable. 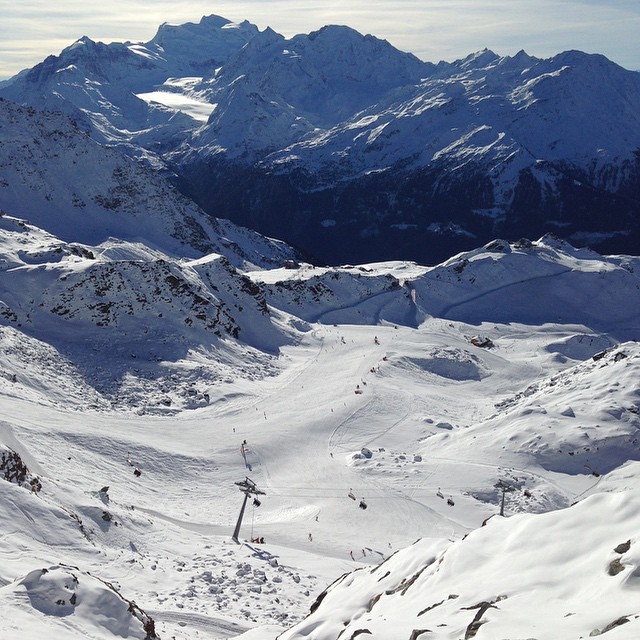 For the remainder of November i stayed at the glacier as the Col de la Croix was still open, meaning only a short drive to get there. When more snow would arrive the Col would close, doubling the journey time.

Although the previous month had seen plenty of snowfall this didn’t continue. The picture below is from Veysonnaz, on the famous Piste de l’Ours1. As you can see the conditions were poor and snow cannons were running. In fact the snow cannons ran most of the way down the piste and were struggling to have much effect. C’était dur! 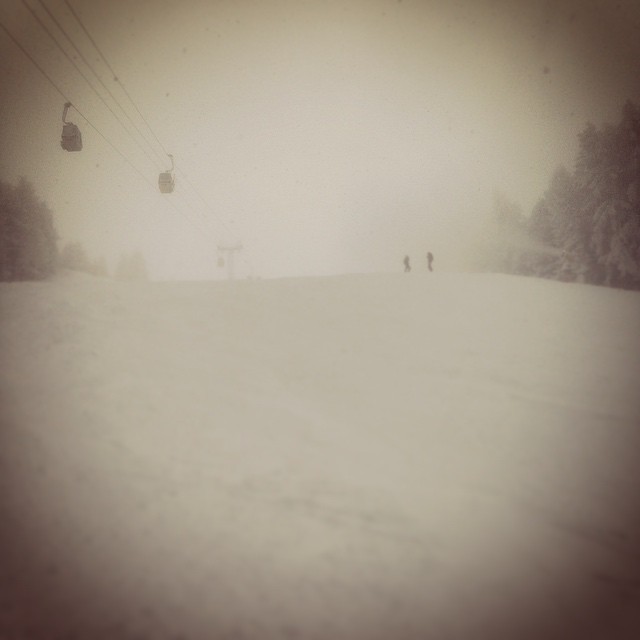 Although the snow at Veysonnaz wasn’t great, the rest of the day proved more fruitful. An excuse to practice some French listening comprehension led to an idea that would result in a new photo project and a reason to visit several more resorts over the remainder of the season.

Due to the lack of snow and high temperatures in December the conditions on the slopes here were pretty poor, more like the end of the season than the middle. The high temperatures meant newly installed snow cannons were of no use. 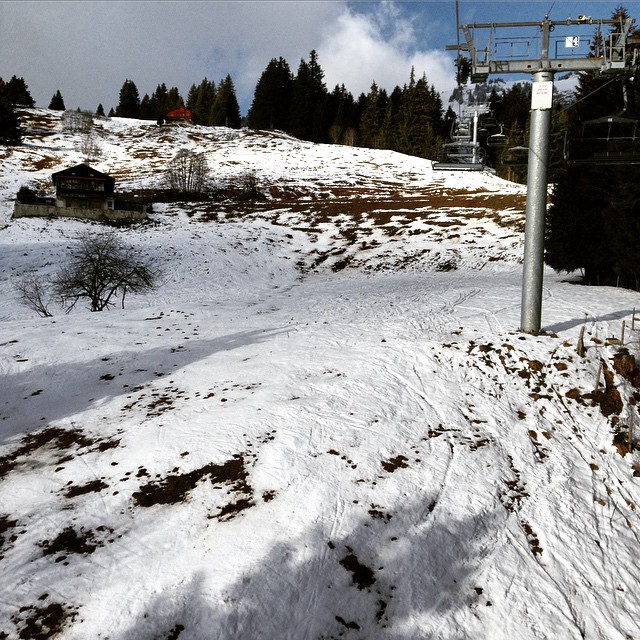 This wasn’t unique to Villars of course, and the biggest problem was there being no base layer of snow and there wouldn’t really be a base layer for the rest of the season. This resulted in an avalanche risk of 3 (out of 5) for the duration of the season, which is pretty serious2.

Of course the temperatures dropped eventually and the snow arrived, close to 1m of powder in a week, and with the low temperatures it stuck around. This gave me a chance to explore some areas i hadn’t seen in the previous season: Le Crot3, the back of the Petit Chamossaire, under the chairlift on the Gryon side, and the area pictured below that requires a little walking to get to. 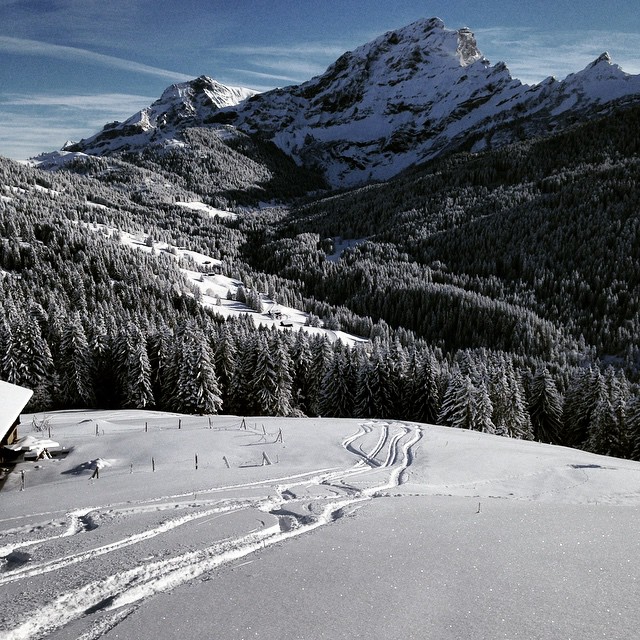 Riding some of the off piste terrain demonstrated just how sketchy the conditions were however. The snow was pretty unstable and despite the aforementioned snowfalls there were still many exposed areas.

I visited a few more resorts in February: Charmey, Les Mosses, Les Pléiades; all small resorts, so even though it was the peak of the season these resorts were quiet.

In March i travelled a bit further, to Portes du soleil and even Chamonix. I had booked a week of split-boarding in the third week of March but this turned out to be bad timing. The temperatures were very high for the time of year so the snow was terrible. I ended up leaving the week early having got blisters from ascents and didn’t think it was worth sticking around for more. Split-boarding? Yeah it was fun in spite of the blisters, but i’d argue for sticking to skis unless the snow is super good. 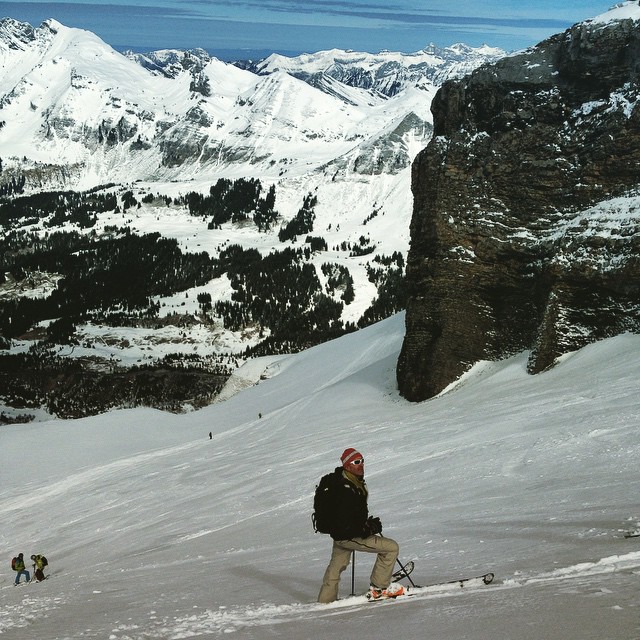 The final weekend of March saw more heavy snowfalls, and i decided to sign-up for one of the freeride days at Glacier 30004. I’m glad i did as i got to ride quite a bit of off piste and the snow was good again. The above photo is part of the resort that i’d been looking at all season. I’d avoided it until now as there is a traverse involved, seen in the middle of the photo, that needs to have good enough snow coverage as there is no escape route.

Even more snow fell in April for the Easter weekend, resulting in 4 straight powder days. I kept relatively close to the pistes however because the avalanche alert level had been raised again. Here’s a shot from between the trees on the side of the Petit Chamossaire, you can see Bretaye in the background: 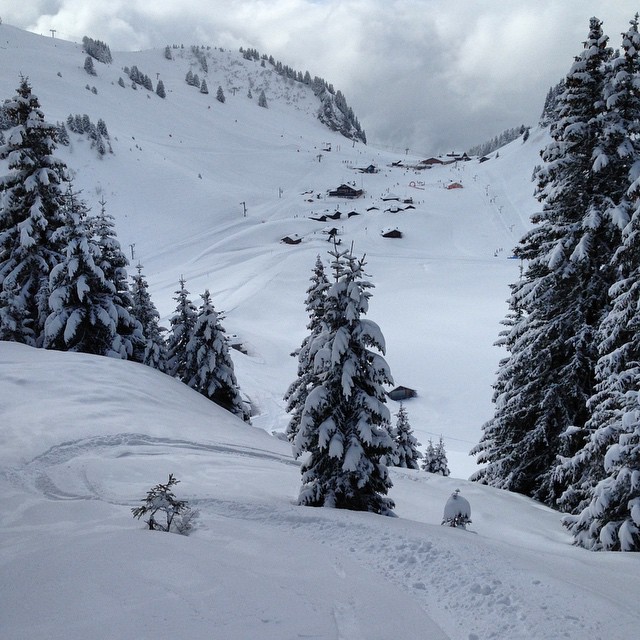 Note to self: get a transceiver, probe, and shovel for next season.

Actually no days in May due to the conditions, so here’s a photo from my last day in April from back on Glacier 3000 and back into powder. This was high up on top of the glacier, lower down the snow had turned into solid chalk and was no longer fun or safe5. 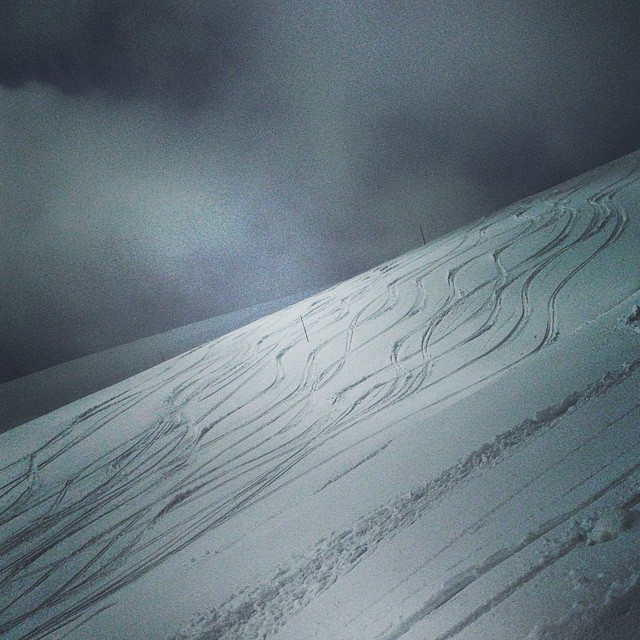 In total i spent forty four days on the slopes here. If you include the time in New Zealand in August, then the total is forty nine days. So close! However a couple of days were very short due to the snow conditions, just one or two runs, so the real total was closer to forty. I could have gone beyond fifty days but by mid-April the snow, or lack thereof, meant it wasn’t worth it.

Maybe i’m starting to get picky?

You can see many more photos from the season on my Instagram feed.