Blog | Photo Projects | About
The Market For Discontinued Photographic Film
August 14, 2020 ( Prev / Next )

My fridge was recently full of instant film. I mean that literally, it was not possible for me to put any more packets of the film into the fridge without risking damaging them: 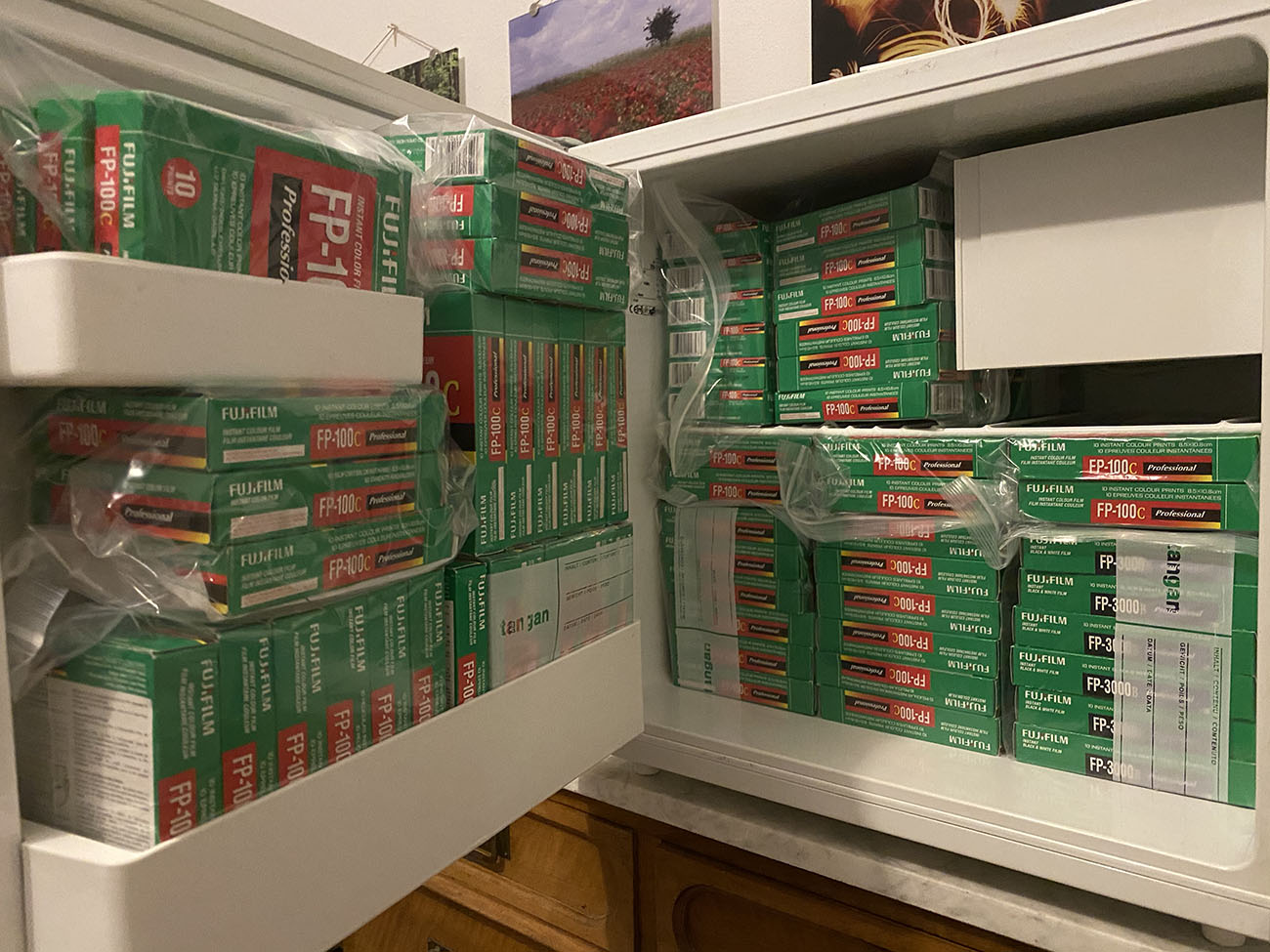 I had acquired all of the film one day when my printer sent me an email asking if I wanted to purchase 93 packs of Fujifilm FP-100c for 2,790.- CHF. That’s 30.- CHF per box, about three times what this film used to retail for and about one third of what it currently sells for1. So I thought about the offer for five minutes, then said yes.

I figured I could sell half of the packs and recoup my costs, after various expenses, then I would have around 45 boxes that I could shoot a photo project with. So I picked the film up and thanked my printer. He even included the above fridge, three Polaroid cameras, and a bunch of accessories for free. So whichever way I spin this, even if a few packs went missing in the post, I would still be close to doubling my investment at the least if I decided to sell all the film. Not bad.

The film had been discontinued, at least announced to be, in early 2016. The film was still available on a wholesale level up until sometime in 2018 so people had started stockpiling it and the prices inevitably went up. The problem with photographic film is that it will start go off in a few years as the chemicals break down, so it needs to be cold stored. This is especially the case with instant film as there are chemicals not just to record the image but also the entire development process is included in each frame.

There’s a market for this stuff as there is a range of old cameras and backs for other cameras that can only function with it. The film comes in dedicated plastic packs that the cameras/backs are designed to work with. You load a pack, fiddle about a bit, and you are ready to shoot. Like other instant films you take the shot, pull out the frame, give it a minute or two, then “peel apart” the frame to reveal the image.

The film can still be bought “new” on auction sites, some analog specific photography stores, and private sellers; but all of the film is now expired as the last batch was marked to do so in early 2019, so there’s a risk involved in any purchase of this film if you want it “fresh”. To purchase a single box of the film from one of the last batches you should expect to pay around 100.- CHF. Ten times what it originally retailed for.

Given there are ten frames in each box, and due to the fickle nature of the cameras that shoot this type of film you can often lose one or even two frames due to mechanical or exposure issues, you’re paying in the region of 12.- CHF per photo.

This is not a case of having to learn how to load and use the film - sometimes you just have bad luck. The paper mechanism used to pull out the shot frame and prepare the next sometimes tears. Just last week I was using some and the first frame leader from the box tore, I had to open the camera to retrieve the next leader and lost another three frames in the process. Somehow the third frame managed to hide amongst the rest and turned up again between the 6th and the 7th frame, something I’ve not experienced before.

This is not fun, it’s quite ridiculous, and if I’m being honest I don’t see the point of this stuff and find it all very annoying. I say that as someone who is steeped in the film process. Sure I understand the aesthetic and the tangible nature of the process, but that’s not for me. I mean, if you really want to shoot it that’s fine, but at this price point I would now prefer to emulate it, at least when the reason to do so is to have some sort of contextual point for the aesthetic. Each to their own of course. 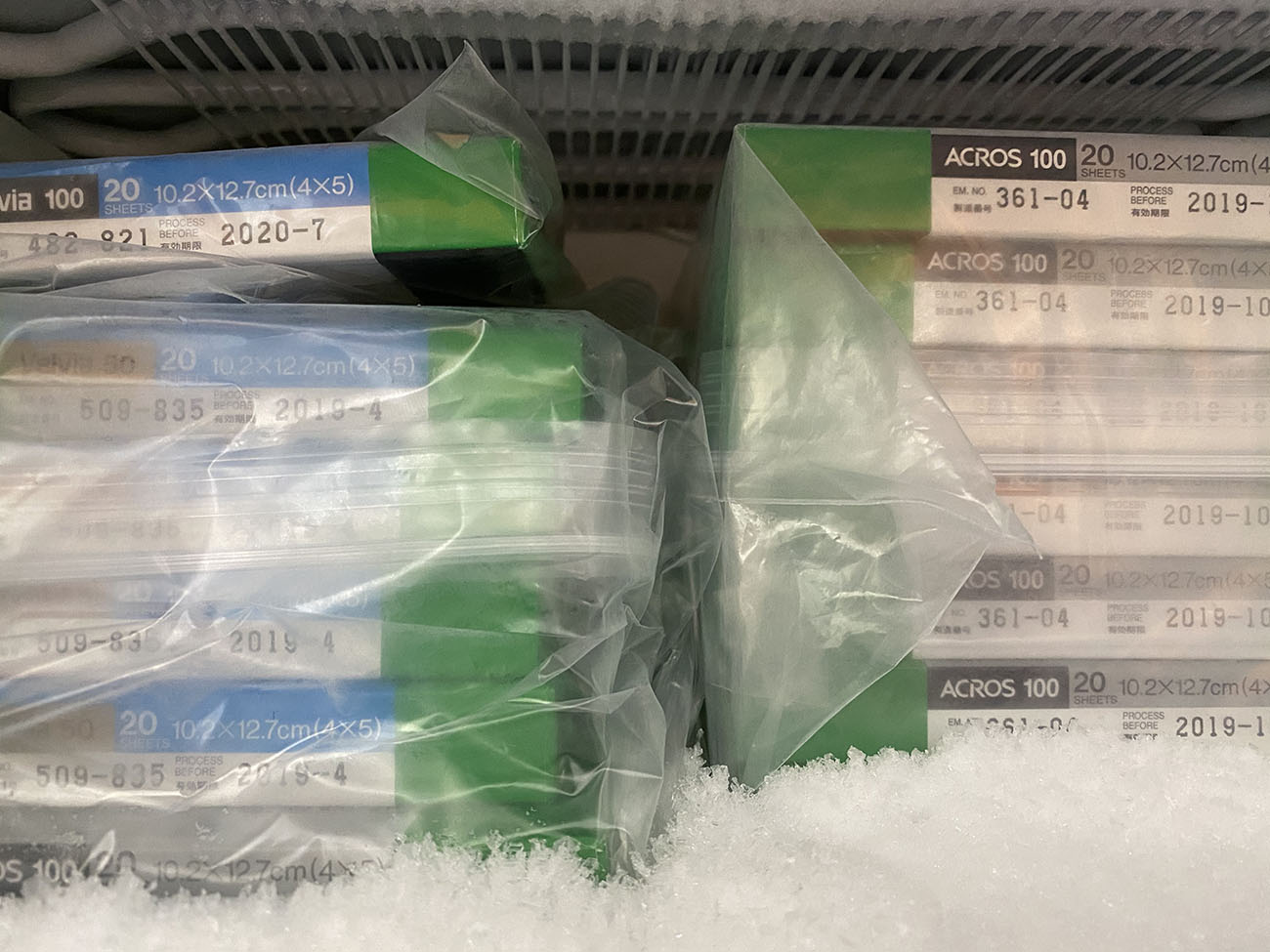 Anyway, Fuji have got form with this. I’ve been using some of their film stocks for close to two decades so have seen product lines come and go, and my other fridge/freezer (above) contains some of those products that I do continue to use. Of course you can still purchase some of the discontinued film if you really want to. A few of those I use or used to are detailed below, and this is in no way an exhaustive list:

Neopan 1600 - A mid to high speed black and white film that had a grain structure that I haven’t seen in other films. I used this quite a bit when shooting skate photos but it was never available in formats larger than 35mm so I stopped when I moved exclusively to medium format. You see this now and then for sale, but it won’t be good to shoot as it’s at least a decade expired and mid-high speed film doesn’t last more than a few years after expiry unless it’s frozen; and of course you can’t guarantee the storage history.

Fuji Fortia - a once/twice off colour slide film that was released around 2005. It was like Fuji’s Velvia 50 (detailed below) but with even more saturated reds. There were rumours that it was a batch of Velvia that didn’t pass quality control, so Fuji sold it as a special edition for the cherry blossom season in Japan. It was available for a couple of years so probably just a single run, which does backup the “it was a messed up Velvia batch” rumor.

You see rolls of this for sale now and then, with the price approaching ten times what it originally retailed for. This was available in medium format so I did shoot it and you can see what I mean about the saturation from the image below, which I actually had to desaturate a little in post as it was just too much. 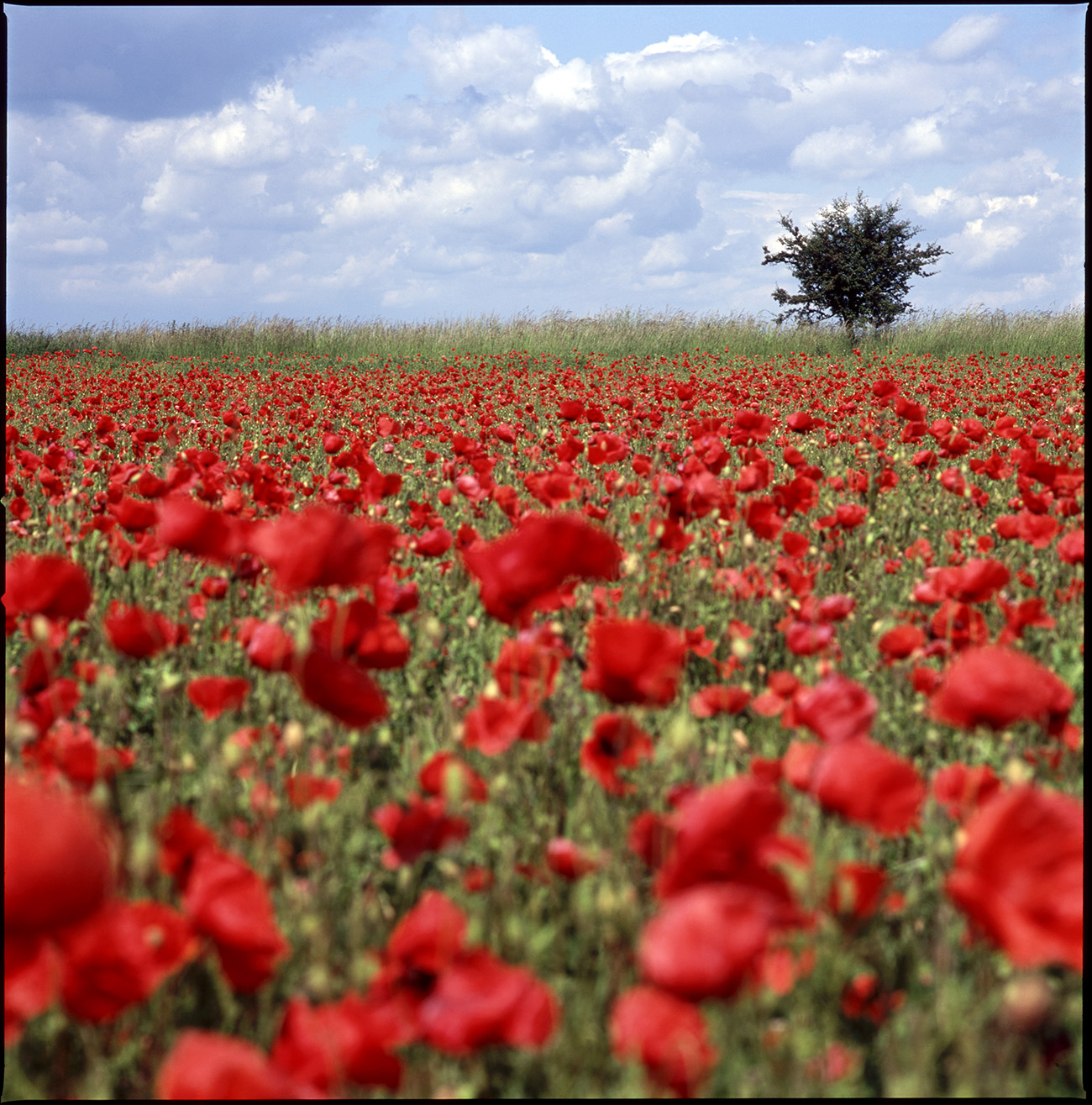 Acros 100 - Another Fuji speciality, a medium to slow speed black and white film that offered four selling points: extremely fine grain for its box speed (100 ISO), very contrasty in normal development, very sharp, and very good reciprocity failure rates. You can shoot exposures up to several minutes long with little adjustment required, which may well be unique amongst all film stocks.

This was discontinued a couple of years ago but then came back as Acros II, however it is no longer Fuji manufacturing it and I believe it is a co-operation with Ilford2. This is probably a good thing, however the 4x5 version of the film is not being made and luckily I stocked up on this a few months before its original discontinuation was announced so I have enough to last me for a few years at least. I am using this film for a specific project, which is why I bought a few boxes; my current count is 12 remaining, that’s 240 frames.

I rarely see this for sale in its 4x5 version, and those I do see tend to not be from the final batches, which had expiry dates of 2019-10. This was selling for about 70.- CHF a box when it was available and I suspect those final batch boxes would go for at least twice that now.

Velvia 50 - The classic landscape (and Formula 1?3) photographer’s slide film. Very popular up until around, I dunno, 2005? It’s still going, but i suspect will be discontinued soon. It’s no longer available outside Japan in large format sizes, and Fuji have cut down on the number of options for it in smaller sizes. Also of note is that when I was stockpiling it the boxes had very short expiry dates, less than a year, suggesting that sales have slumped. Since then the price in Japan has gone up 50% so it’s no longer a compelling option.

I still shoot this, but it’s very fickle. It needs graduated neutral density filters in many cases (which I don’t have) and suffers from terrible reciprocity failure and very easy over/under exposure even if you know what you’re doing. You often have to bracket your exposures +/- a stop, which is not cheap when shooting large format film. When you get it right you understand why it was number one it its niche, again another shot that I had to pull back the saturation: 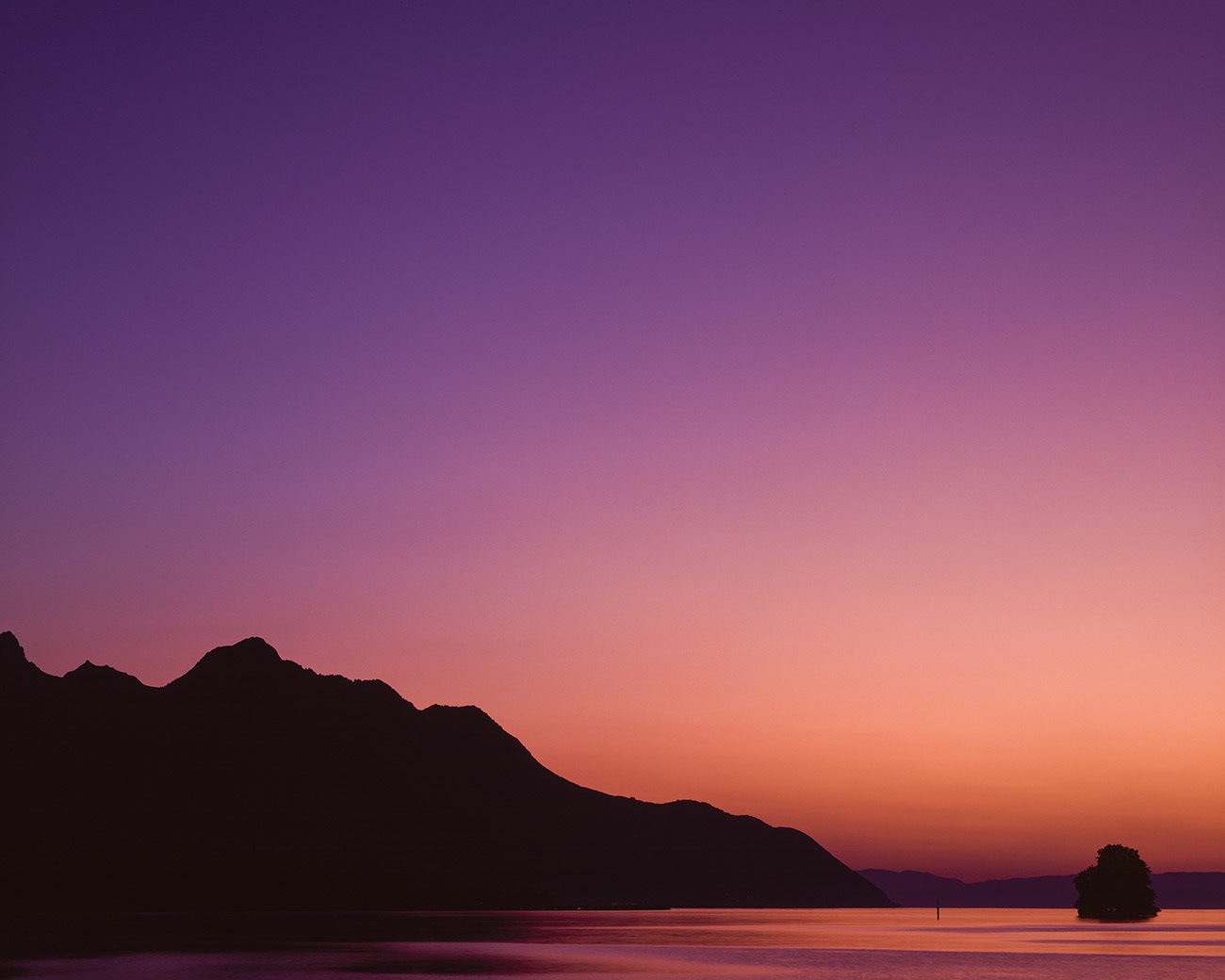 What Does This All Mean

Discontinued film stocks are selling for twice to ten times their original retail price, so should you invest in film? Nah, not at all. Unless you discover a batch of Fuji FP-100c that’s been cold stored, is from 2018 or 2019, and selling at less than 40.- CHF a box, in which case go for it and double your investment. Clearly there is a market for discontinued photographic film emulsions, but they’re a niche within a niche and we’re now down to the products that don’t offer a unique selling point.

The discontinuation of the above stocks doesn’t mean much, really - you can just switch to another stock and adjust as necessary. Yeah it’s frustrating at first, but that’s the nature of film. The issue with Fuji FP-100c being discontinued is that it also renders an entire range (and more) of cameras unusable4. There are no other options, or at least limited options, to continue using the cameras5.

That’s what’s kind of sad about this entire thing, although I guess that is the end state of all technology designed around using refills to function. Printers, things with fixed internal batteries, liquid fuel vehicles, SodaStreams? There’s more of these than you think. We will still have 35mm film for a long time I suspect, and 120 and 4x5 and 8x10 and so on; but some of the more niche products are approaching obsolescence and thus unavailability. We can retrofit some of the technology that require these refills, but eventually the expense isn’t worth it.

My reasons for shooting film are because it gives me access to alternative formats and some technical controls that I can’t get elsewhere, at least not at an affordable price point6. Movements, a square or panoramic frame, an alternative way to interact with my subjects. An interesting observation about instant film is the reaction to it, compared to shooting a digital image that is effectively the same. The tangible nature of the process really is a hook.

To refer to a blog post I have quoted on more than on occasion already on this blog7 - “Film is still available and I shoot it. Eventually it will be much more difficult to get and I probably won’t shoot it anymore.” With the aforementioned situation, with the difficulty of servicing/repairing my film cameras, I recently feel much closer to the latter part of that statement.

I’m down to my last 35 boxes of Fuji FP-100c, having sold 50 or so boxes and shot some of the film. I’m not a fan of it, as I’ve already explained, so I might sell it all and put the funds towards buying a digital back for my Hasselblad.