In which we wonder if Monopoly, the board game1, is trying to establish a monopoly amongst retail board game space.

I first noticed this when I went to an F1 race at the Paul Ricard racing circuit back in July 2018. Given the quality of the racing there, utterly mundane, it’s not surprising I was looking for more interesting things to photograph. So I wandered into the gift shop, as you can usually find something of curiosity in those type of places. 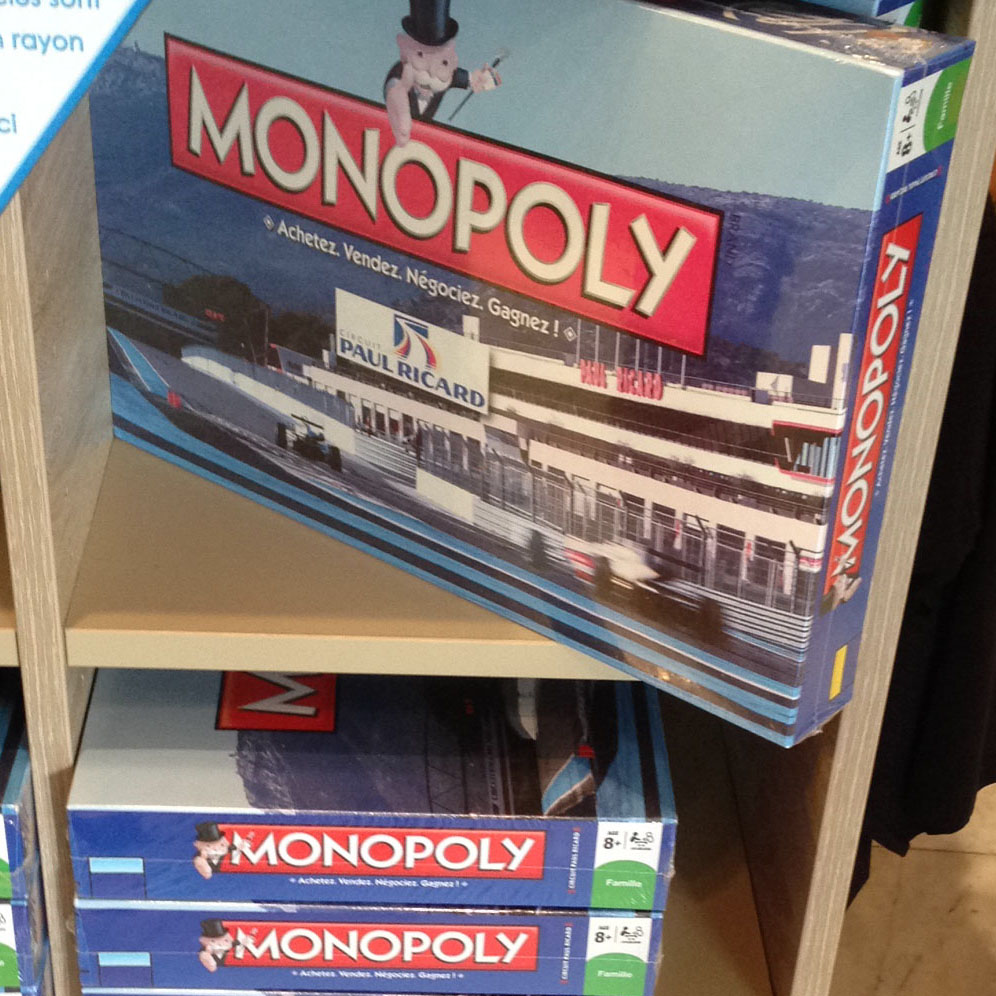 Even the box art and cover photo are terrible.

Who doesn’t want to play a version of Monopoly based on the Paul Ricard circuit? A track that hadn’t been used in twenty five years, was relegated to being a test circuit, then fell out of use due to testing restrictions being tightened, was only just back on the calendar, is based in the south of France miles from anywhere of interest, featured utterly boring racing, and was about as welcoming and as comfortable as a quarry?

It turns out that these Monopoly franchises are a thing. It’s almost like the owners of the game name and play mechanics are trying to, er, get some sort of hold on the board game retail space at the cost of far more enjoyable board games…

So I started to see more of these, and I started to collect photos of these rather than ever buying a copy because, well, I’ll get to that. 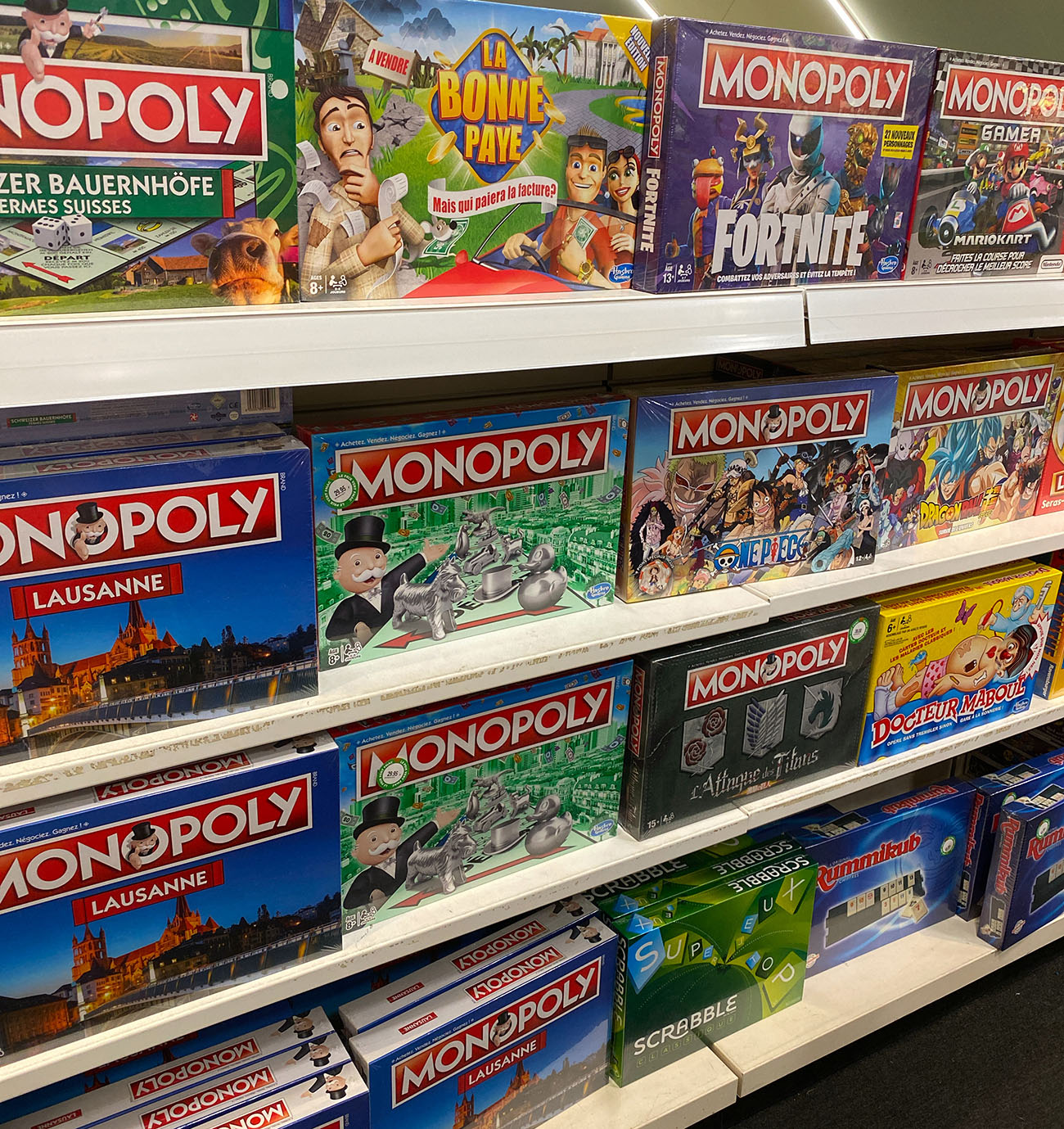 Not quite a monopoly

Trying to collect photos of these things appears to be a pointless endeavour as not even the Monopoly Fandom page knows how many of them exist2. A good guess might more than 3,500 and less than 10,0003. That is mostly down to, I imagine, there being a lot of variations based on any town or city that has enough vanity to create their own version. There’s a Lausanne version as seen in the above photo. Lausanne!

Monopoly Is Designed To Suck

That’s the entire point of the game, to demonstrate the inequality in land/property monopoly4. It’s about as enjoyable to play as a version of Snakes and Ladders that has no snakes or ladders. It’s purely luck based, another point of the mechanics, and is often played with “house rules” that drag the experience out over a number of hours rather than keeping it to less than twenty minutes of hate5.

You roll the dice, you move your piece, you buy (or someone else buys) the property you land on. Repeat until all players but one go bankrupt. There’s literally no strategy in this game. None: 10 ROLL; 20 BUY OR PAY; 30 GOTO 10;

These Things Are Everywhere

Wander into your local tourist office and chances are high you will find one. Brick-and-mortar stores selling a miscellany of stuff might stock a handful, and if they have a dedicated games section they will probably have a dozen. Visit a dedicated board games store and the chances are high you won’t find any at all, not even the original version. What does that say?

Here’s one from the tourist office in the village: 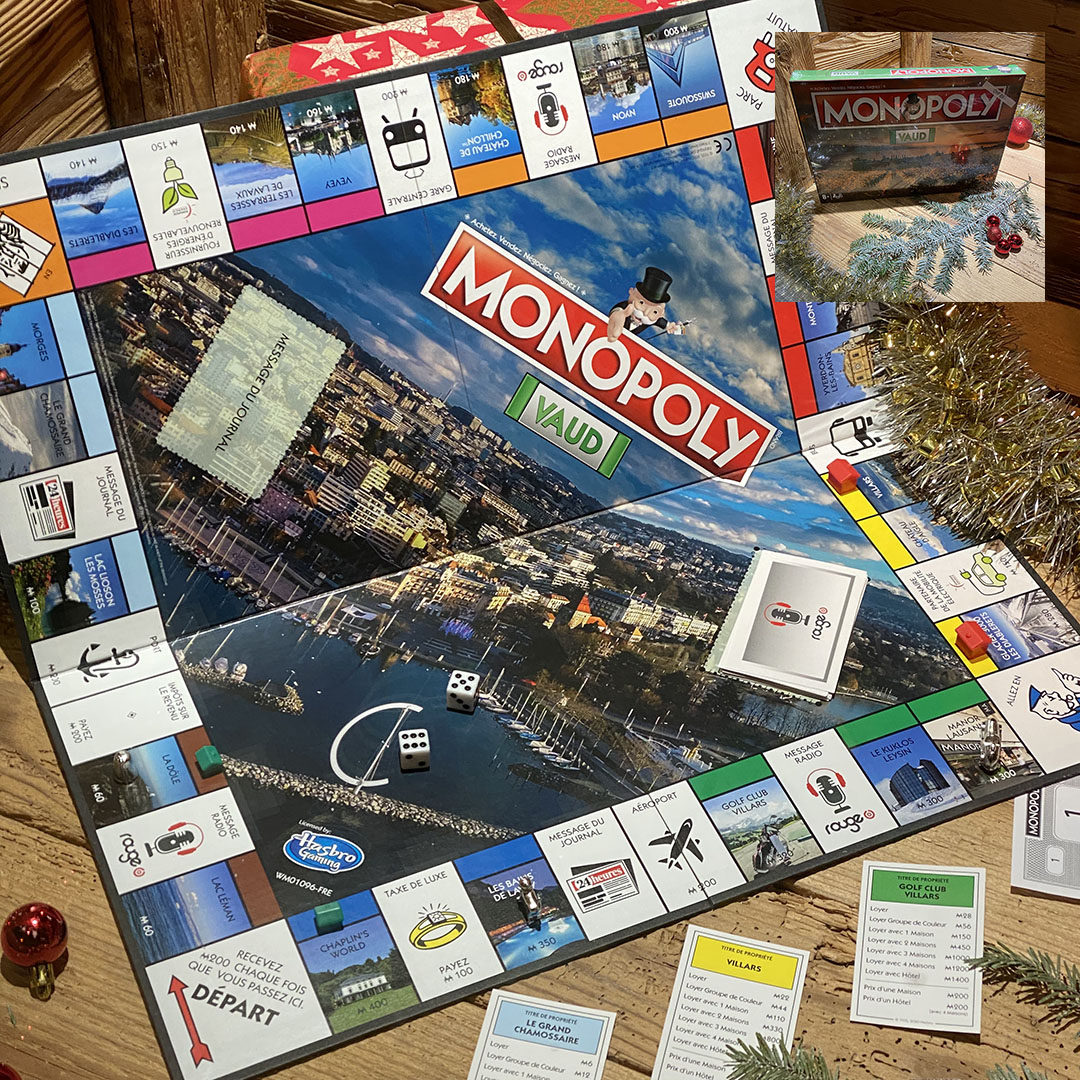 None of this makes sense!

Thankfully they didn’t go as local as having a version for the village because that would be stupid. And look at the price: 69.- CHF. Board games are not cheap in Switzerland but you can buy games like Wingspan, Azul, Catan, Root, Ticket to Ride, etc, for 50.- CHF or so in most board games stores.

What’s interesting about nearly all of the variations I find is that they must be some sort of licensed / franchised version of the game as the style of the box, board, font, chap in the top hat, are all clearly the same as the original version we are all familiar with. So it’s not like these are rip-offs - the owners of the various copyrights are in on this.

So How Much Do These Things Actually Cost?

I assumed nobody was creating these things because they are engaging board games, and more likely because they can make a tidy profit, so I started doing some Googling to find out how much it costs to create these custom variations.

I did find one site6 but it doesn’t seem to be affiliated with the rights holders of Monopoly since some of the artwork / fonts / branding are off - It turns out that you can’t copyright the mechanics of a game, so the mechanics of Monopoly are in the public domain, but you can copyright the various names, artwork, style, characters, etc. Since nobody wants to buy a copy of Monopoly that looks like a cheap(er) knock-off the official looking versions are the ones taking up all the retail space.

They don’t seem to be affiliated, as I said, so I searched a bit more and found another site7 that then led me to another site8 that looked to be more like what I was searching for - custom Monopoly variations with all the style and artwork of the well known one. So I submit their “contact us” form to get a quote. As I put nonsense information in most of the form I doubt they will get back to me.

This isn’t Quite a New Thing

While wandering around a games museum, in La Tour-de-Peilz9 of all places, we discovered a small exhibition on the history of Monopoly. They had some of the early copies of the game, which wasn’t interesting - I mean, the board hasn’t really changed in almost ninety years.

What they did have though was a couple of early variations: 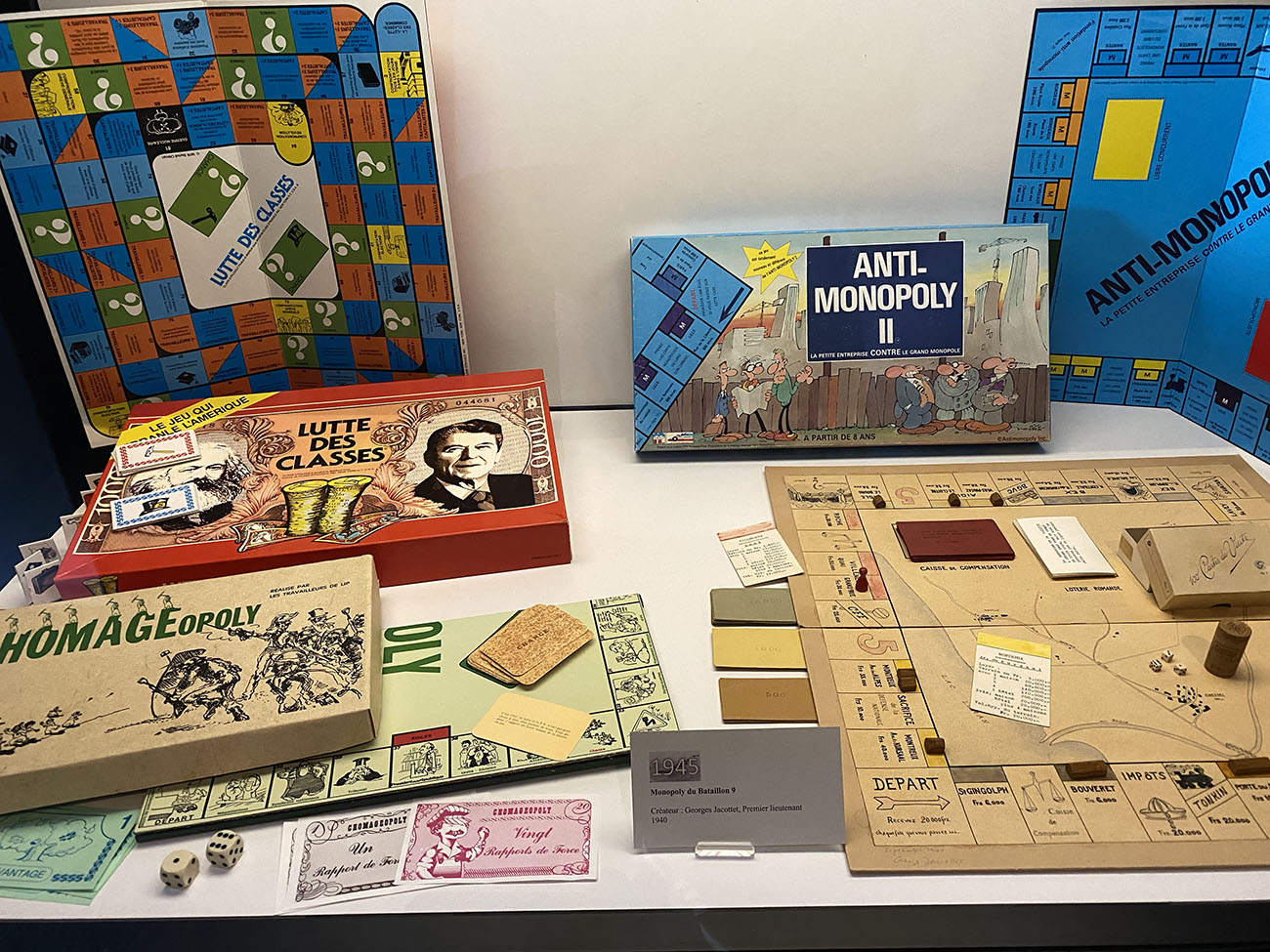 That’s Anti-Monopoly (II) - “The small business against the big monopoly”, Monopoly du Bataillon 9 - some sort of war version (from 1945) that is clearly Swiss given it references the Loterie Romande, and even Chomageopoly - chômage being the thing the [Swiss]French call unemployment benefit. How that works as a version of Monopoly I have no idea.

It should be said that I am in no way against expansions and extensions to board games - just have a look at my Catan shelf: 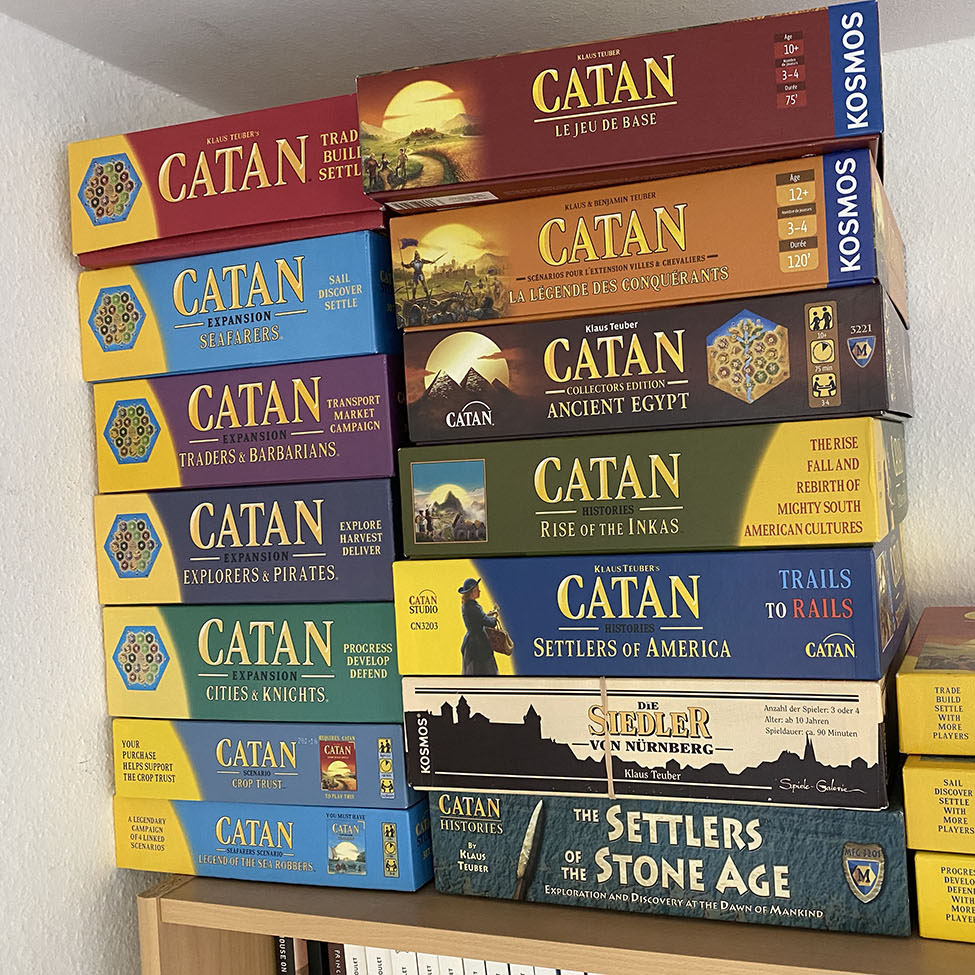 However, all of these change the game in some way - new rules, different board layouts, more players, different mechanics. The Monopoly variations all seem to be exactly the same game with just the artwork changed, and there are thousands of them.

I decided to stop shooting photos of these things after finding this one (bottom) a couple of months ago, as it seems the mechanics have come full circle much like the board layout itself: 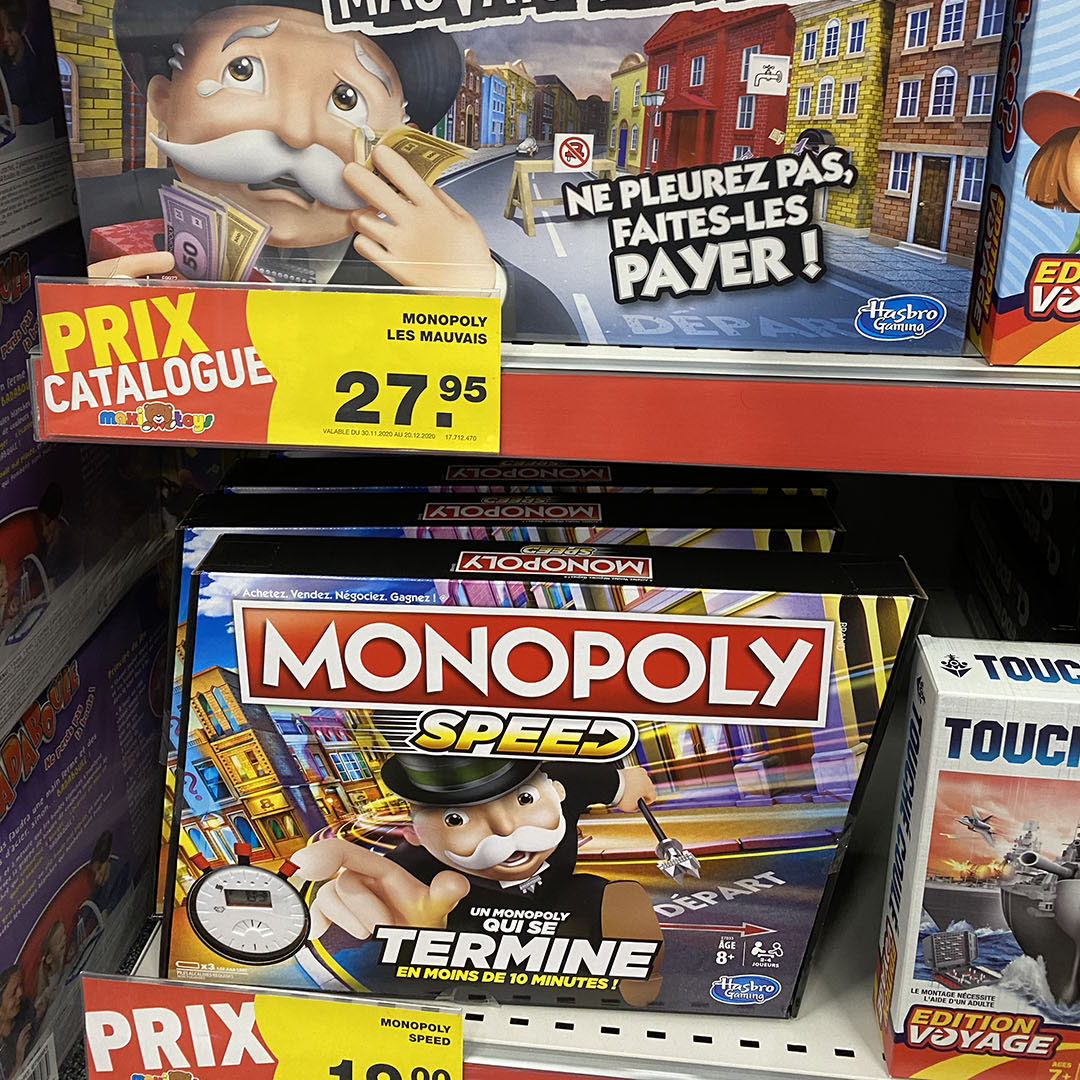 Does the ten minutes include setting up the board?

That’s right, “A Monopoly that ends in less than 10 minutes!”.

Anyway, it’s just a curious observation. Monopoly is a shit game, stop buying it. If you absolutely must buy it, get that less than 10 minute version as seen above.