Or alternatively “Curiosities in Vinyl, Part 2”. But this is less about vinyl and more about expectations.

The main one we’re concerned about here is the amount of surface noise when playing a record. It’s inherent in a format that involves dragging a needle across a piece of plastic and amplifying that signal several times over. There will be surface noise, it’s inevitable.

What we hope is that we can reduce the noise that we hear due to other environmental and handling factors, those being: dust and dirt, static, and scratches1.

Note the emphasis on “we hear”, because there’s far too much over analysis in this space that includes the use of things like microscopes, spectrograms, and all sorts of other audiophile snake oil bullshit. How does it sound. Period. 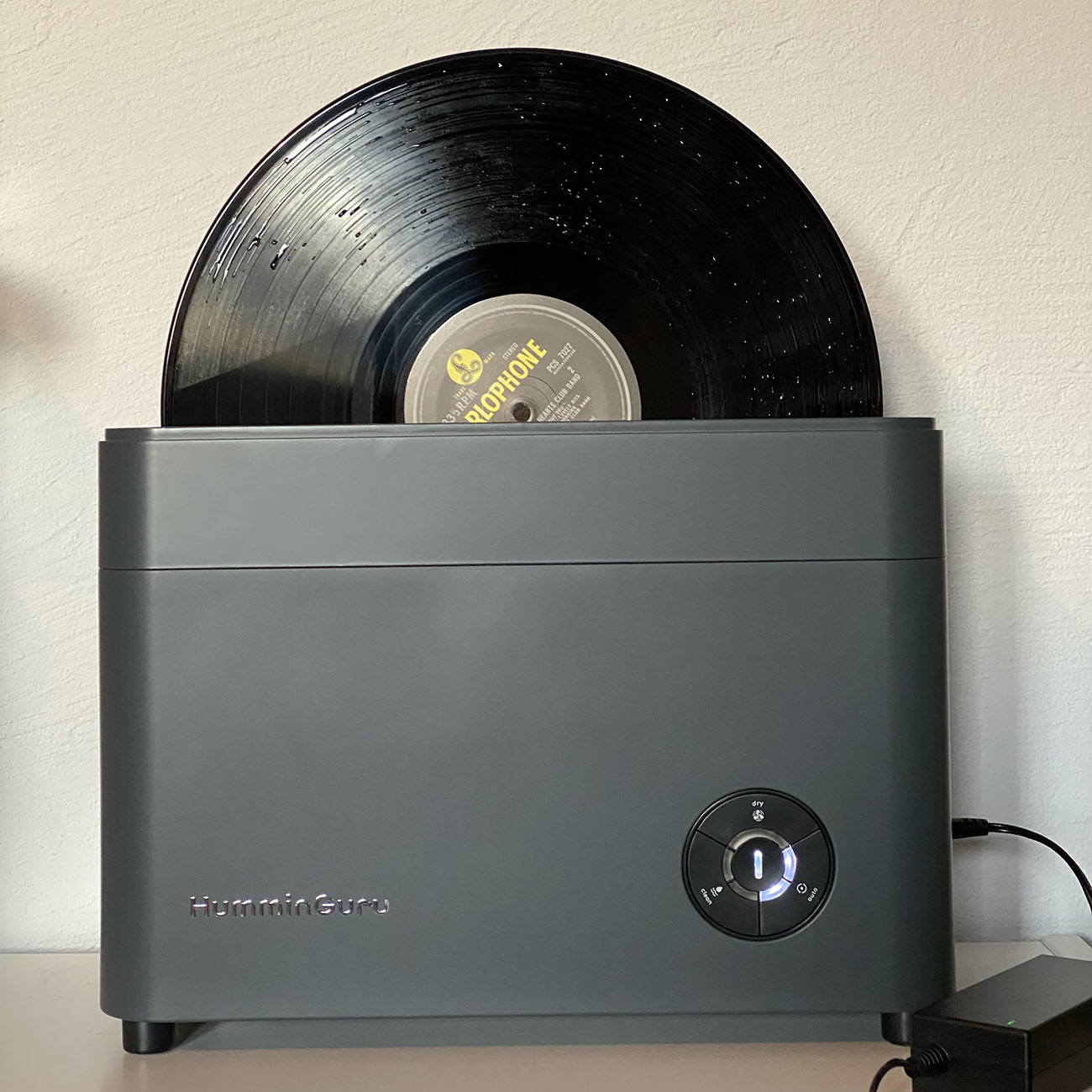 Sgt. Pepper's in The HumminGuru

This is what first got me curious about all of this - the above is an ultrasonic record cleaner. You add some distilled water, put the record in the top, and push a couple of buttons. Five minutes of washing and ten minutes of drying later you have a cleaner record. The “cleaning” process just uses distilled water and ultrasonic waves, no actual “cleaning” product in the traditional sense.

That’s the theory anyway. What sets this one apart is the cost: one tenth of the cost of most other cleaners using the same technology. About 350.- CHF compared to anything from 2,500.- CHF upwards. So a bit of a bargain really?

So does it work? Of course it works. It would be asinine for a company to manufacture and sell this thing if it didn’t. You just need to set your expectations at the right point. Let’s test that with a before and after.

I picked up a copy of Sgt. Pepper’s secondhand in a store in France last year. It seems like an ideal test because it was a relatively recent pressing (I think the 50th anniversary one) but was not new. In other words it was not sealed and may well have been played a few times. Here’s how a section of it sounded before using the HumminGuru on it:

Note that there’s nothing fancy going on here to capture the audio - I stuck my iPhone up against the speaker and used the dictation app. How does it sound? Sounds good enough, but yes there’s some obvious “noise” here and it’s enough to be distracting2.

How about after we’ve put the record through the cleaner:

Better, right? Still a click or two, but the noise is reduced significantly.

That’s about what my expectations were for this machine so I’m happy with it. I don’t expect it to clean a record to the equivalent of zero noise. That’s probably not possible anyway, and even if it were by the time I take the record back to the player and start playing it I assume it will have picked up some dust. I’m not playing these things in a clean-room, nobody is.

There’s quite a few reviews on the HumminGuru now available, in written and video format, and the those reviews are mixed. Ranging from “it doesn’t work” to “it works pretty well”, but reading/watching them tells you more about the expectations of the reviewer than the efficacy of the machine. In fact, there are some rather contrived tests of this machine (and others) that don’t really tell us much about the real world use cases for it.

The device will probably reduce 80% of the noise through dust in 80% of cases, those of naturally occurring dust and dirt due to the normal use of a record over many years, which is pretty good. Given I’ve been picking up more second hand records3 the HumminGuru is proving useful. Not just in that use case however; a couple of records appeared to be scratched, but a run through the cleaner fixed that. So, scratches…

Which generally occur due to mishandling, so don’t mishandle your records right? Easier said than done. If you’re purchasing anything second hand you’ve got a bit of a lottery, especially since “Near Mint” can mean anything from “unopened and never played” to “I dropped it once and the dog shat on it, but it looks OK”.

A bit of a digression here, but “Near Mint” should mean that if you run it through a wash it looks as though it is unplayed and it sounds as if it’s new. That last part is important, even new records can have a few pops and clicks. Even records that look perfect can sound absolutely terrible. As an example I present this one: 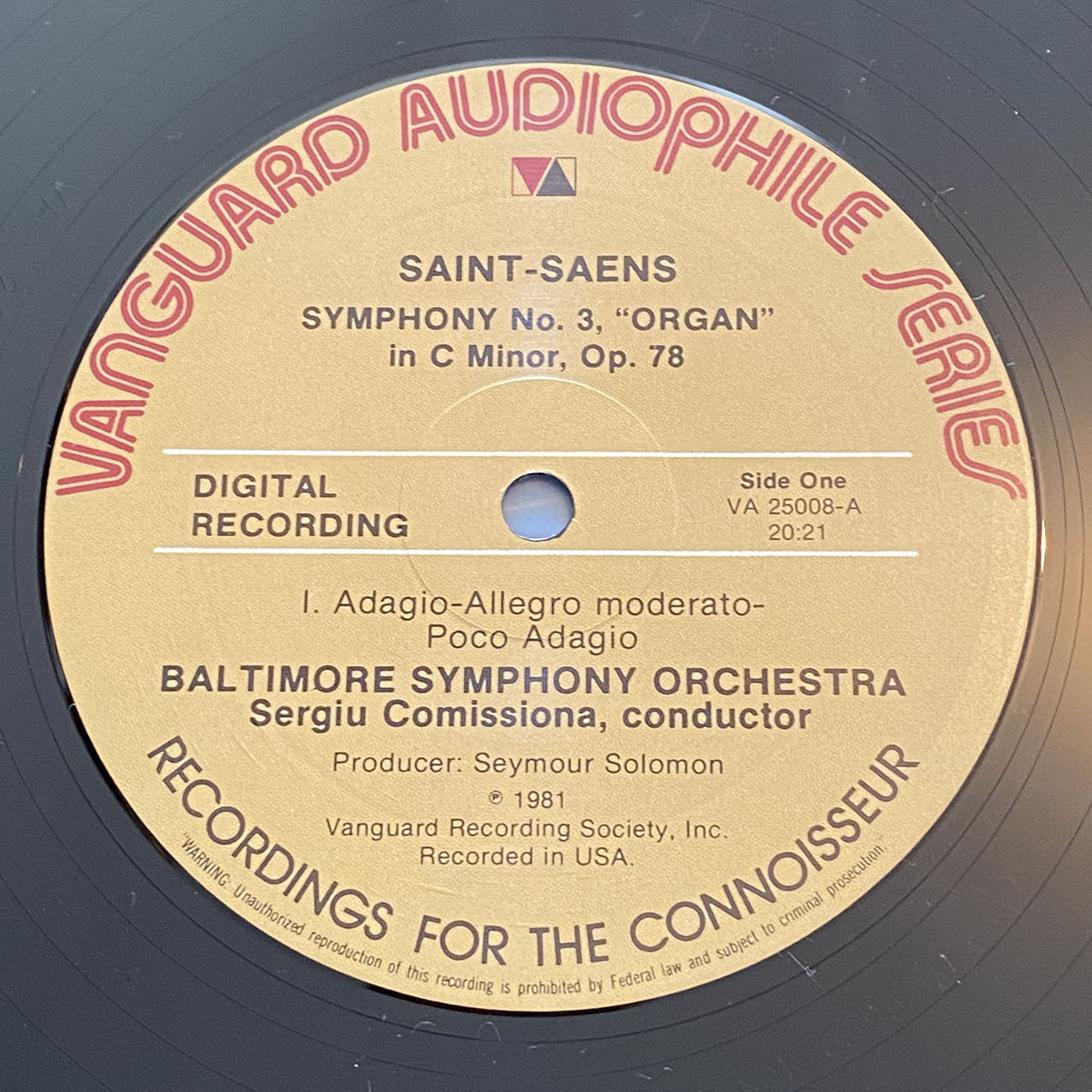 Vanguard “Audiophile” Series? Recordings For The Connoisseur? Must be good, right? I picked this up down in the valley for 5.- CHF. Pretty standard for a second hand classical recording on vinyl. These things are pot luck in terms of condition. Most vinyl stores will have a large selection of them for sale and they (probably) don’t bother doing anything other than a visual inspection when they buy them.

This one does look in excellent condition, even the cover was like new, but the record sounds like this:

That’s pretty terrible. Especially given you’ve got this wonderful part of the first movement where we get the organ introduced, with the first major key after ten minutes in a minor key and CCCRRRRKKKKKRKKRKKK.

Given a lot of classical music has extremes in dynamic range any sort of unwanted noise can be very annoying. I ran this one through the wash in the hope that it would clean up some of the problem - it’s not a record that should be difficult to clean, there’s only 15mins of music on each side so it’s not squeezed on there with narrow grooves that would make it difficult to clean. Here’s the after cleaning sound:

Nope, it’s fucked. This sounds a lot like a manufacturing issue. The record itself looks good, but clearly there’s a lot of crap stuck in the grooves or it’s been played on something that was setup so badly it damaged it. The record is [now] 41 years old, so you would expect some noise but not this sort of cacophony.

I did wonder if it was a manufacturing issue, so took a punt on a sealed copy of the record that was available on discogs, which cost about 20.- CHF so still relatively cheap by most release standards. Sure enough:

Sounds brand new. Well, it was. A sealed 41 year old release. Not that surprising. Yeah, the second hand one I picked up was just damaged. I think in future any second hand classical records I purchase I will ask to have a listen to first. I may do the same with any second hand records.

This is an interesting one and will depend on where you live. At some times of year (late winter/early spring) up here in the mountains the air is very dry. It’s dry enough that I get a couple of static shocks a day just walking around the office.

Vinyl records are made of, er, vinyl. Well plastic, a poor conductor of electricity. That means we end up with lots of electrons stuck on the surface: static. When the needle discharges the built up static we can hear that as a “crackle”. However, what’s more likely to happen is that the static buildup will attract more dust and cause it to stick quite easily to the record.

More static, more dust, more surface noise. How do you get rid of the static? A gun: 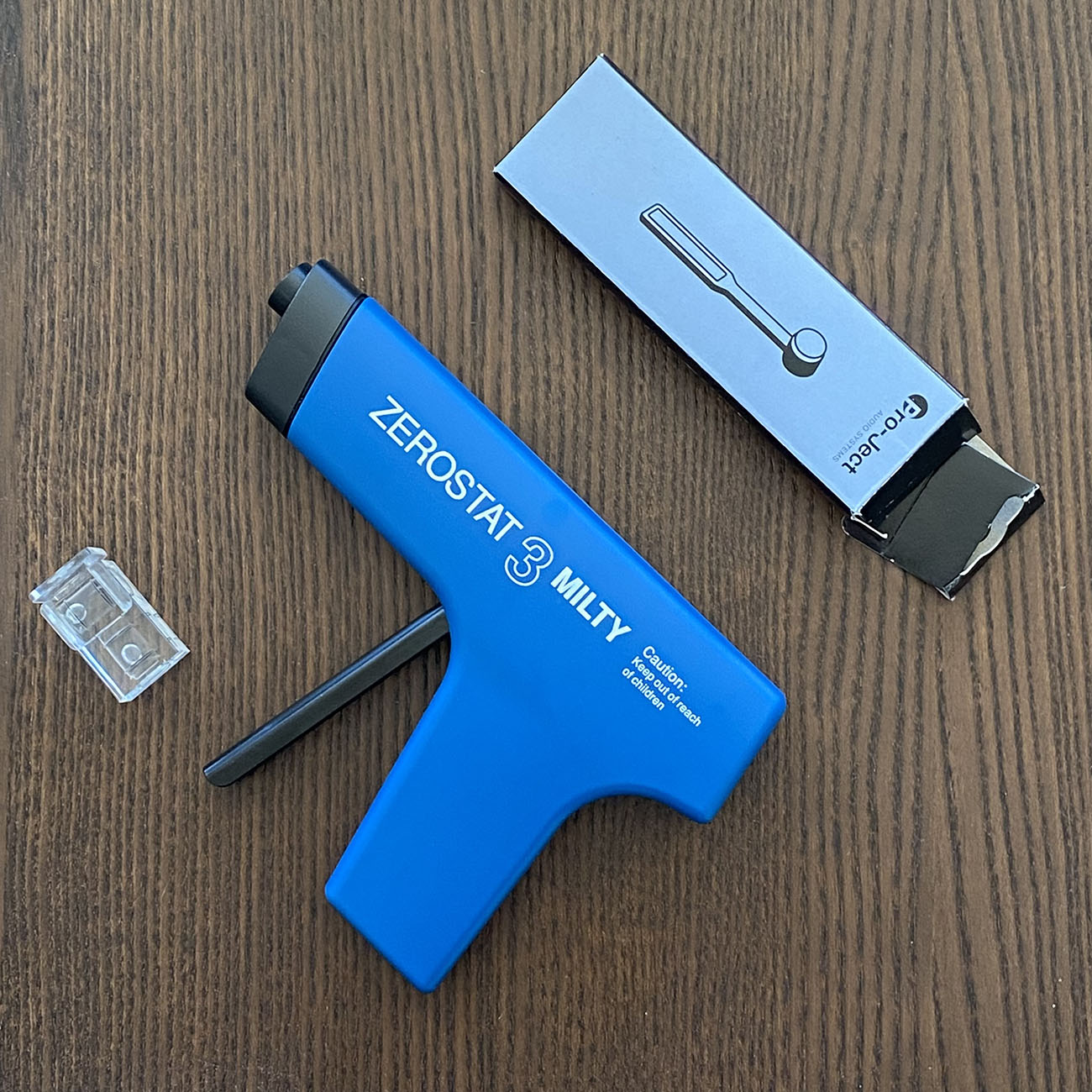 The gun fires positive and negative ions at the target (er, the record). The aim is to reduce the net charge of the surface to (near) zero: no static. Of course, it can depend on how you use it.

Combining the anti-static gun with the cleaning machine probably reduces another significant percentage of the noise, because it prevents dust sticking to the plastic. A combination of methods is the key here - shoot it, clean it, shoot it again.

One final thing - I’ve owned the digital version of Autechre’s Tri Repetae pretty much since it was released, and finally picked up the vinyl version. Note the little addendum here, “complete with surface noise”. That might seem like a joke but the CD version includes “incomplete without surface noise”. 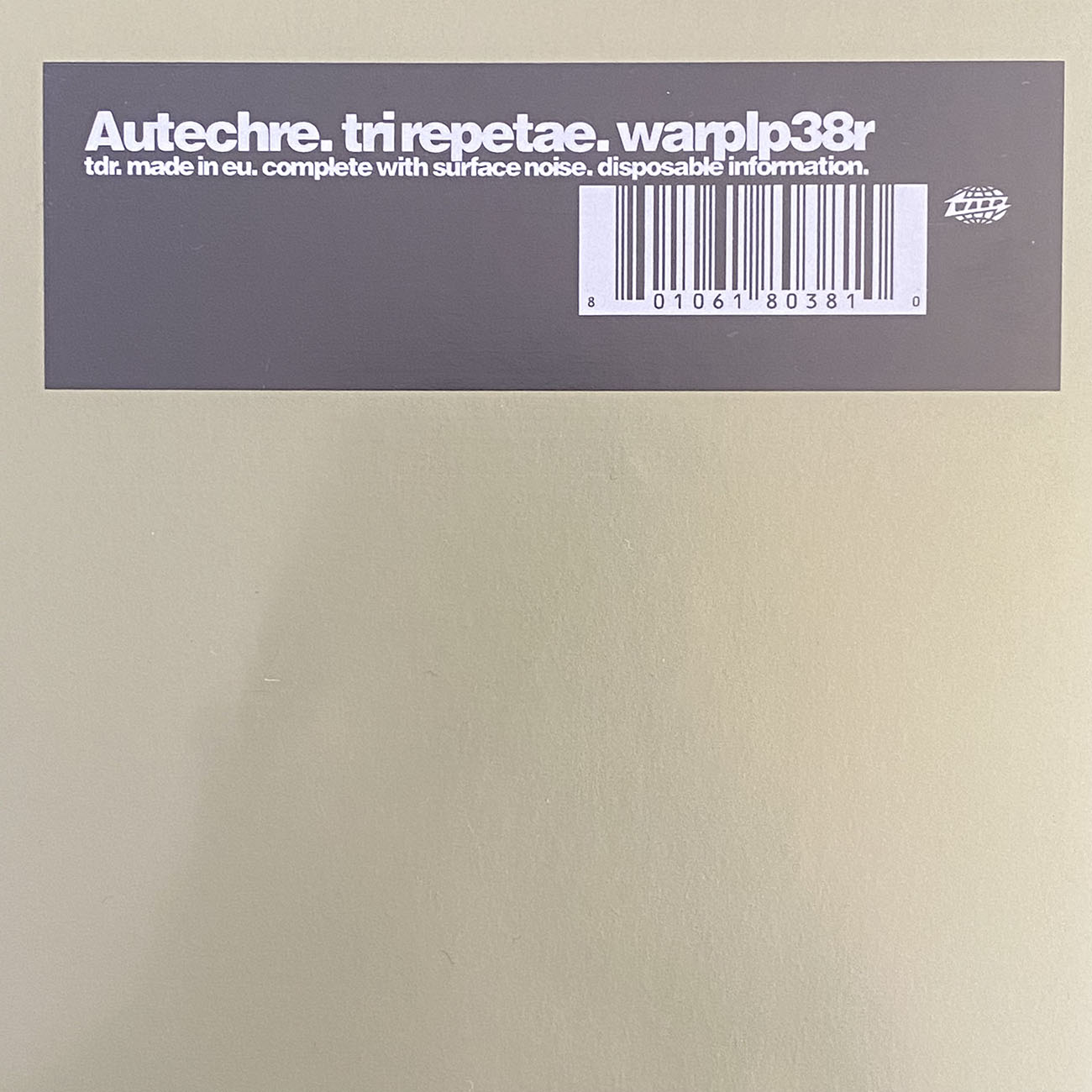 Does it make an difference? Eh, I dunno. I put the album on, loud, but it was too clean to hear any surface noise. Either that or my ear has tuned it out. Or maybe it’s there, just really subtle. You hear it in the quiet sections, or between tracks. I guess that’s the point. And yes, the album still sounds remarkable 25+ years later.