Blog | Photo Projects | Alpine Panoramics | Code | About
Apple Deprecated All My Stuff
November 12, 2016 ( Prev / Next )
This post is over five years old

Warning! This post is semi-serious and full of photos, but i feel that best demonstrates the impact of Apple's recent decision to move to USB-C and *only* USB-C on their new MacBook Pro models. Note that the equipment shown here range in age from one to ten years. Onwards...

My MacBook Pro (13-inch Retina Early 2013) is in need of replacement, at least for my use cases. The battery is near dead, so the laptop won’t actually function as a portable device. I could replace it, at a cost of 220 CHF, however the other constraints of the machine are being hit: the 8GB of RAM is no longer sufficient for photoshop work1, the dual core processor would be better as a faster and/or quad core version2, and the 1TB SSD is down to its last 150GB.

When i bought this machine, in July 2013, i lucked out in that it was the last version with some user-serviceable parts. It wasn’t long before i had replaced the 256GB SSD with a 1TB. Unfortunately i cannot upgrade the RAM. At this point it is clear that if you want a MacBook Pro you get the absolute maxed out version you can, because upgrading any internal components? Not going to happen3.

But it’s worse than that. Getting anything but the previous generation of machines now means you lose all the useful ports because Apple have clearly decided USB-C is the future. It’s highly likely that any new machines, be they iMacs, Mac Minis, or Mac Pros, will also follow this path and ditch all the existing compatibility for the newer connectivity option.

I’m going to hold on for a while, until the battery in this machine is dead and the 1TB SSD is at 95%+ capacity, but it’s worth examining what the impact of Apple’s decision is for all my stuff. 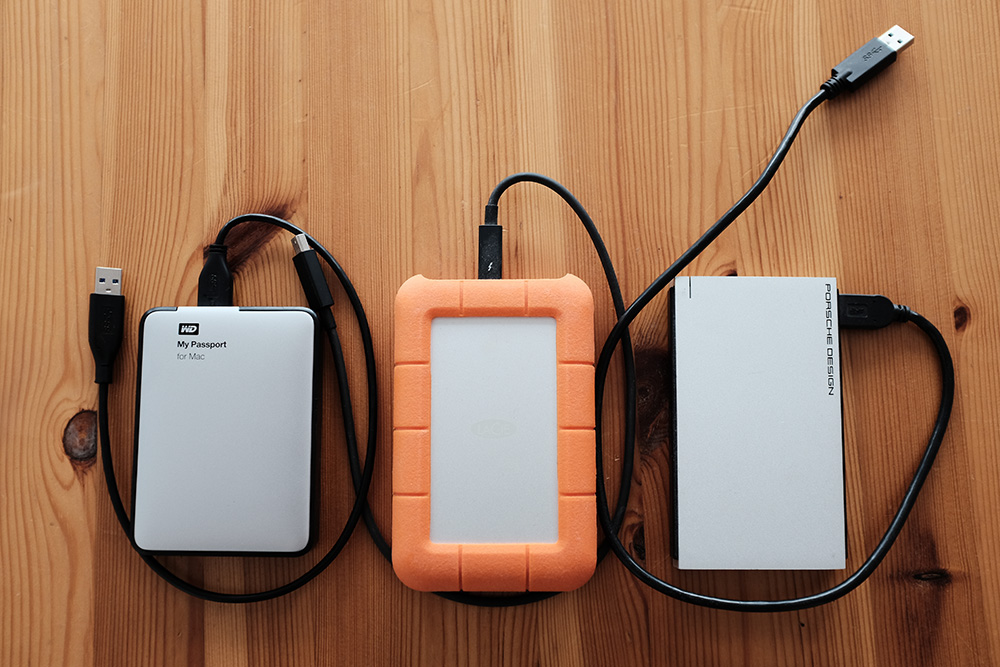 From left to right: WD 2TB, LaCie rugged 2TB, Porsche Design 1TB. These are all backup drives. Oh, not pictured: another WD 2TB drive that is kept in another location, a 256GB SSD (my old MacBook internal SSD) and a 32GB SSD. These all have the USB Micro-B SuperSpeed connections (the LaCie also has a Tunderbolt). So i will need USB-C to USB Micro-B SuperSpeed, which doesn’t seem to exist so i will need a USB-C to USB-A - 9 CHF.

What i will probably do here is sell all my existing drives and replace with newer USB-C models, probably 2x LaCie Rugged 2TB USB-C. Of course i will need a USB-C to USB-A adapter to transfer existing data anyway, but it will be required for other things below. 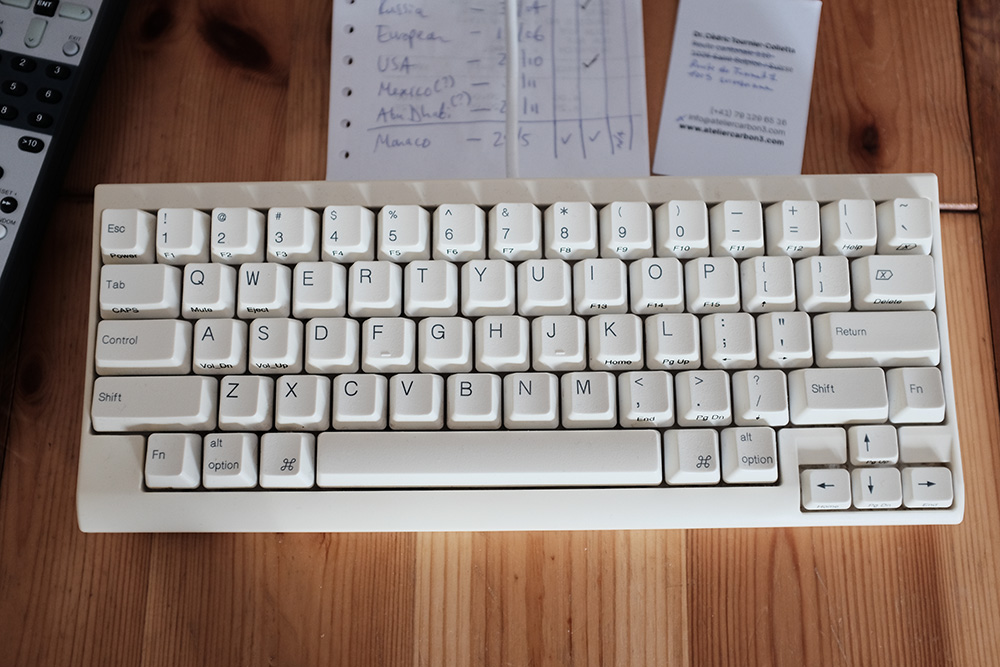 Happy hacking keyboard. I’ve had this one for eleven years and use it because i hate Apple keyboards for anything but short bursts of typing. It looks clean because i recently gave it a shower, yes this is the type of electronic equipment that you can take in the shower without worry. It has a USB-A lead and is obviously plugged into the MacBook all the time so i will need another USB-C to USB-A adapter. 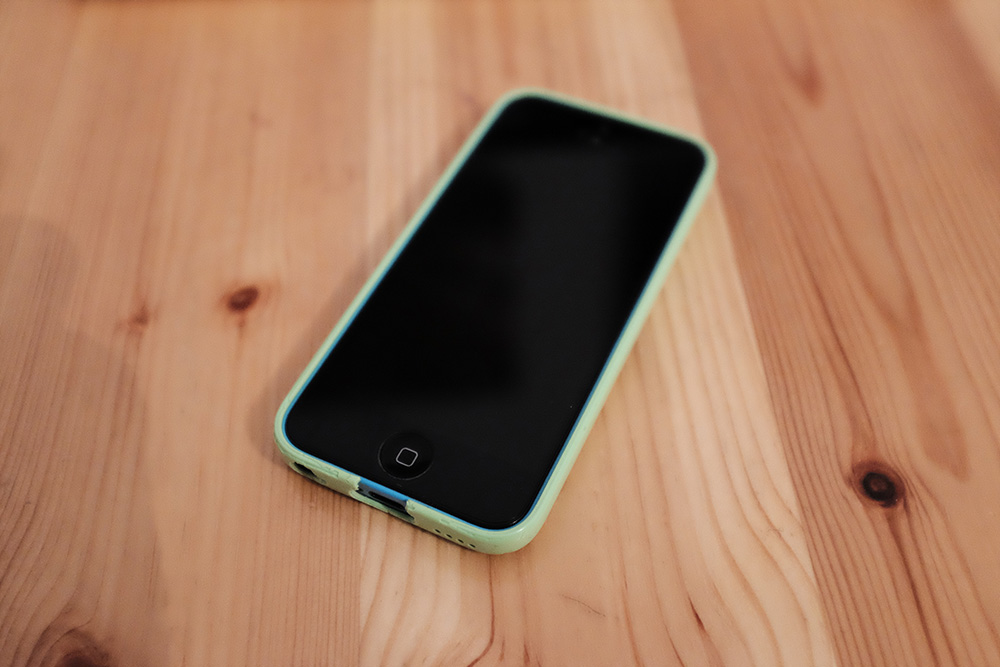 Ha, this is a good one. iPhones have a Lightning connection so i will need a USB-C to Lightning cable (21 CHF). I may just be able to get away with the USB-C to USB-A adapter that i will already have though? 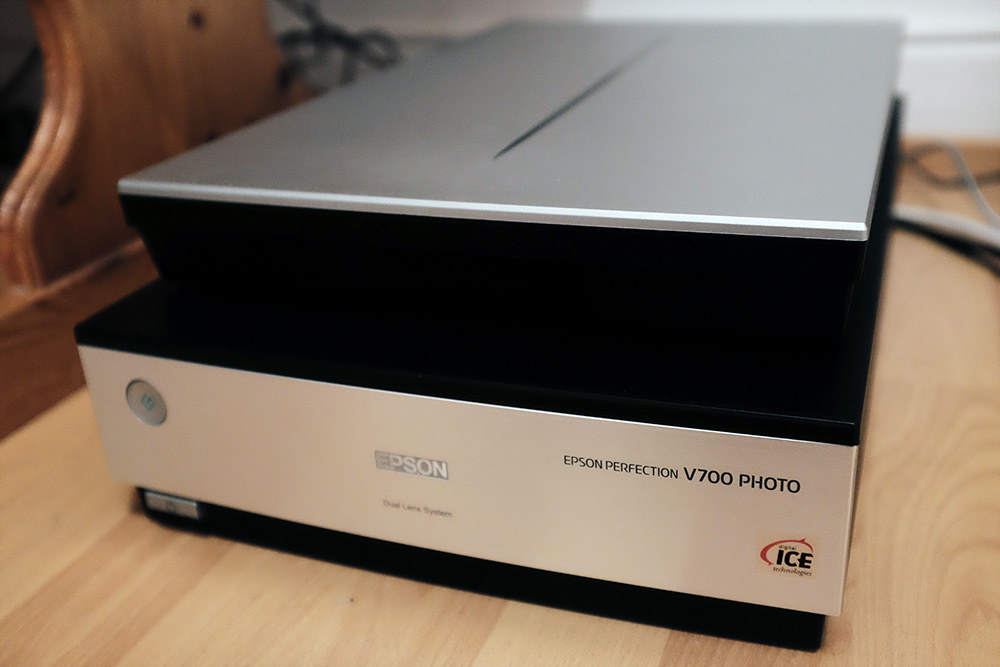 Epson V700 Scanner. OK, nothing really changes here as the scanner uses a USB-A to USB-B cable. I can plug the USB-A end into the USB-C to USB-A adapter that i’ve already established as being required for other things. 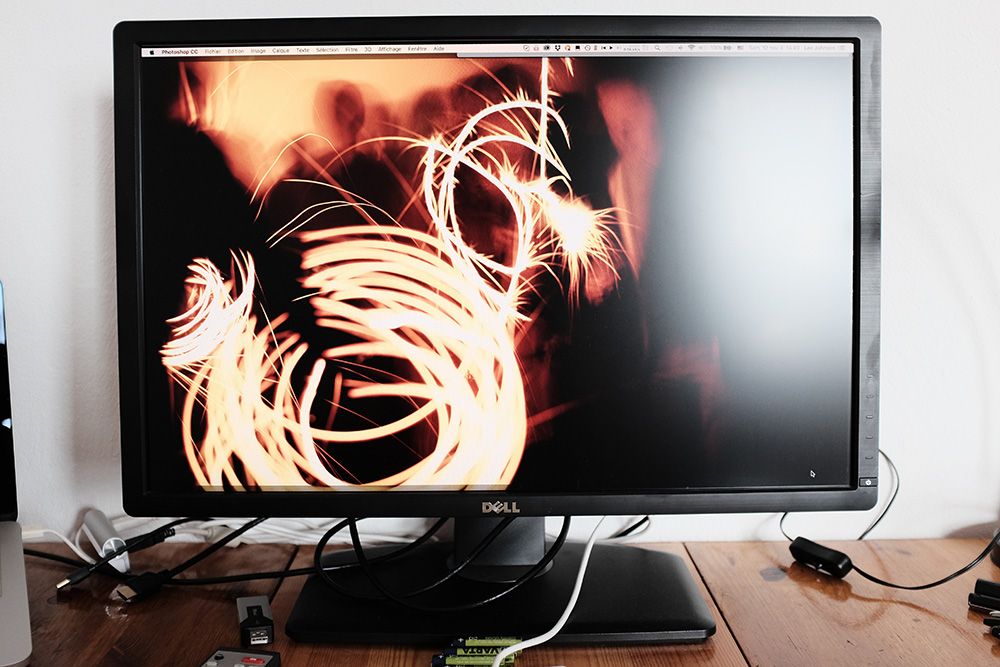 Dell 24 UltraSharp Monitor, U2413. This thing has no shortage of inputs and outputs:

None of which will connect directly with USB-C lalala! Currently i connect this using the Mini DisplayPort input so will need USB-C to Thunderbolt (32 CHF).

OK, we need to tweak things here a little as this monitor has a USB 3.0 hub with an SD card slot. I can plug the keyboard and scanner into the back of the monitor (2 USB-A hub ports on the back) and then plug other USB-A devices into the side ports as and when required, essentially the two USB-A ports migrate from my laptop to my monitor. That eliminates the need for everything but a USB-C to USB-A adapter and USB-C to Thunderbolt as i can use my existing USB-A to Lightning cable to connect/charge my iPhone on the side hub ports of this monitor as well. 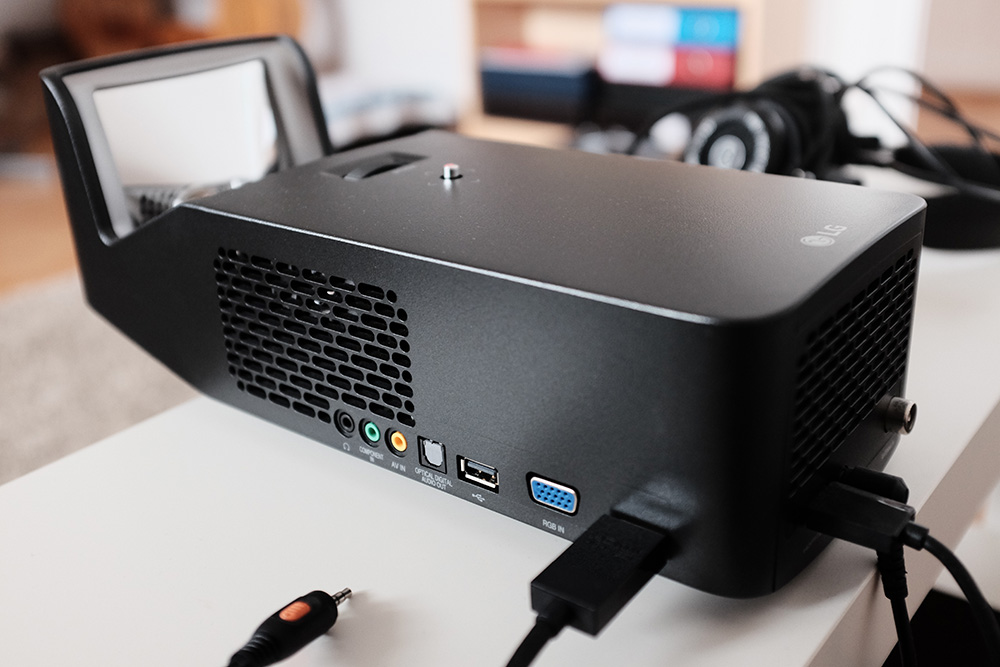 LG PF1000U - This thing is great for watching movies out of the computer, throwing a 100” image at only 30cm from the wall. It has 2x HDMI, optical, RGB, AV, component, and USB-A. None of which i can plug straight into USB-C. Hooray! I use the HDMI output from my current MacBook so would like to reuse the 5m HDMI cable i already have, that means i will need a USB-C to Digital AV Multiport adapter (55 CHF).

Oh, but wait - this adapter includes a USB-A input on it, removing the need for the USB-C to USB-A adapter. Hooray! The adapter also includes a USB-C input so we don’t lose a port because we have to plug a “legacy” device into it (this projector is less than two years old). 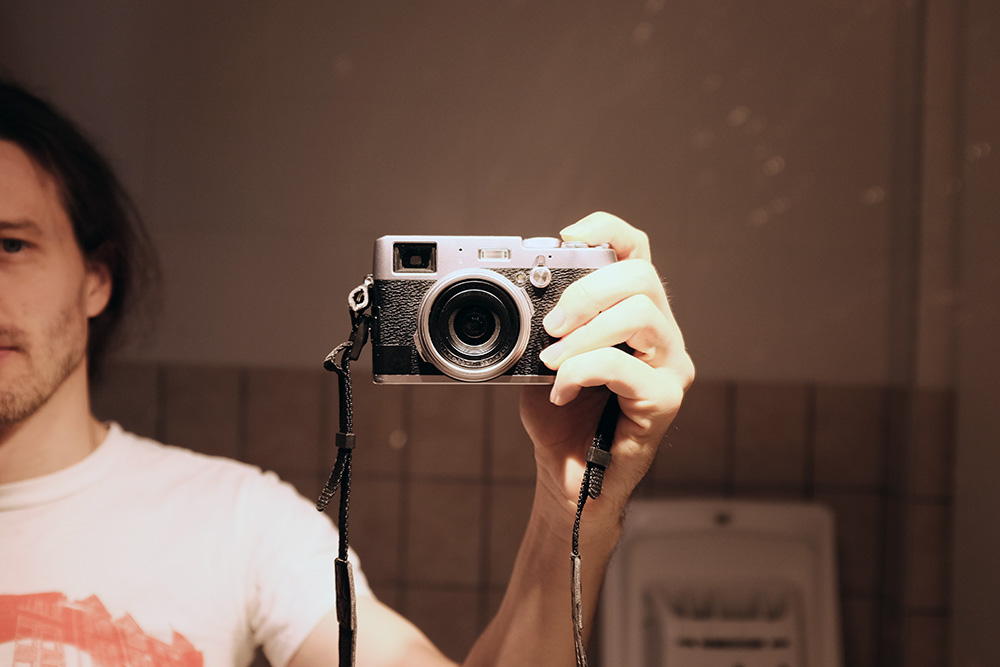 Fuji x100t. This can be charged using the USB Micro-B port on it. I can plug that into the hub on my monitor with its existing cable, no problem. Oh, there’s something i forgot here - my Kindle. But again, a USB Micro-B port so the same applies. The bigger issue with the camera is that it uses a… 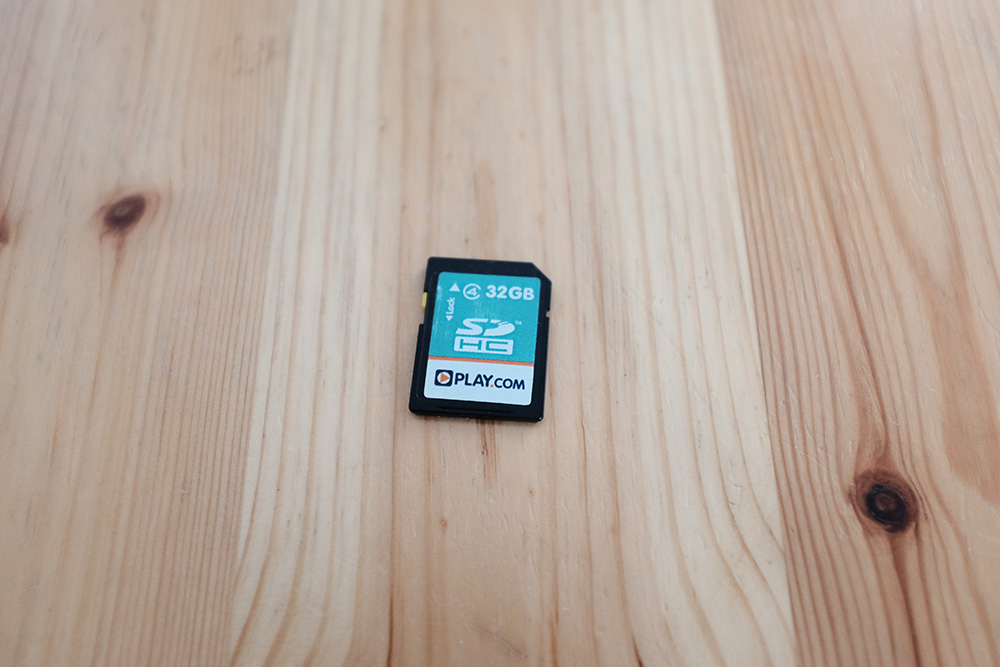 SD Card. Why did you remove the SD Card slot Apple? Why? OK, i can plug mine into my monitor via the hub, but when i’m out and about with the laptop? This is not an uncommon use case, and i suspect you have annoyed many photographers with this move - it’s not just a PITA from a workflow point of view but also in making backups quick and easy. 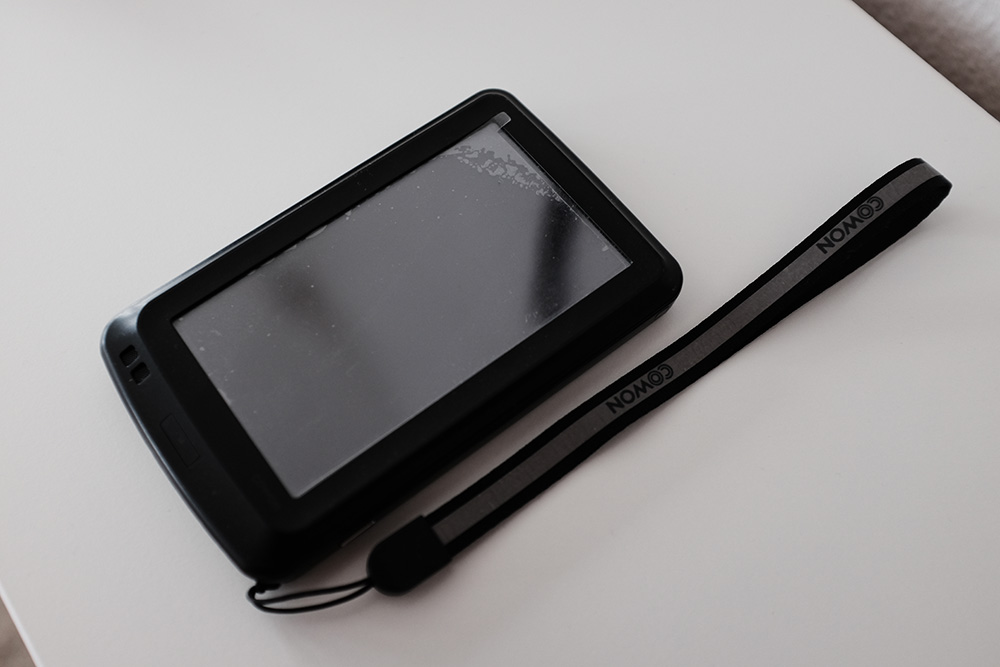 Cowon X7 media player. I’ve had this for six years, possibly longer, and still haven’t removed the screen protector. Let’s get this out of the way first: the interface is terrible, you need to be careful connecting it to a Mac as all those meta files OS X creates can upset it, i’ve had to reset the firmware twice. However, the sound quality is outstanding and it has a 120GB drive so i can fit all of my music on it, and the battery last for days. I can go months without charging this thing.

The connection is some weird proprietary USB input, but the other end is a USB-A so i can plug it into my monitor hub. No more adapters required. 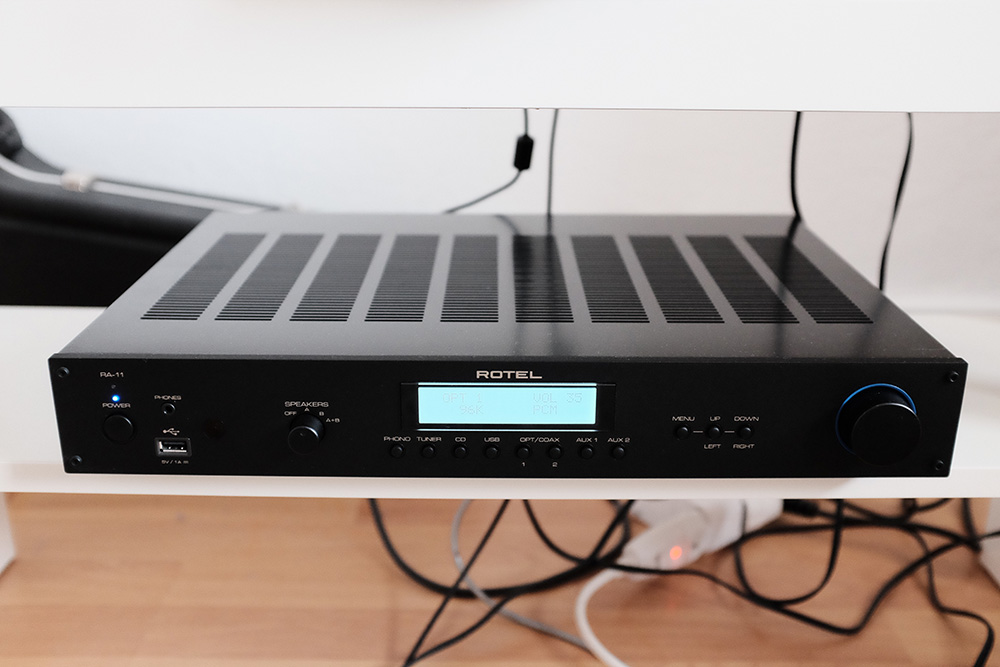 Rotel RA-11. An amplifier, which i use a lot. It is plugged into my MacBook through the headphone port but using an optical cable because the amp features a quality DAC. The amp itself has no shortage of inputs either, as you would expect: 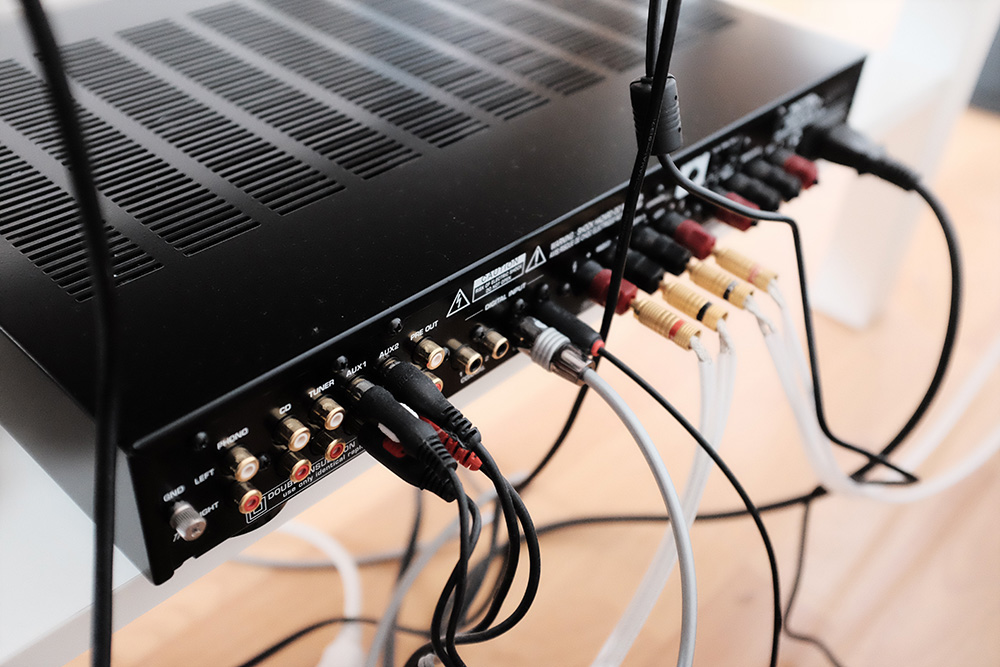 I can carry on using the headphone port on a new MacBook Pro but it no longer supports optical out. Apple state it was removed due to lack of use (i suspect many people didn’t even know that function existed) but this is a direct contradiction with what Schiller said about not removing the 3.5mm headphone jack on the new MacBook Pros: “many users have setups with studio monitors, amps, and other pro audio gear that do not have wireless solutions and need the 3.5mm jack.”4.

If i would like to continue using the DAC on my amp i will have to go over HDMI as currently i don’t see any simple USB-C to Mini Toslink adapters. Given the HDMI solution will involve a USB-C to Digital AV Multiport adapter, 5m HDMI cable, HDMI to Toslink conversion box, Toslink to Toslink cable, and extra power5 i think i will just use 3.5mm stereo to the phono inputs on my amp for the time being and hope someone releases a simple USB-C to Mini Toslink adapter. What a faff.

Well it turns out i don’t actually need that many adapters:

So Apple didn’t really deprecate all my stuff, they just made it so i will have to buy 96 CHF worth of adapters, at currently reduced prices, to continue using them in their current form. I’ve thrown the extra USB-C to USB-A adapter in there as i will need to carry one in my laptop bag at a minimum. If i go to any conferences i’ll just have to hope they have the necessary adapters for video connectivity. Maybe USB-C will go someway to cleaning up the mess, but i don’t think so: 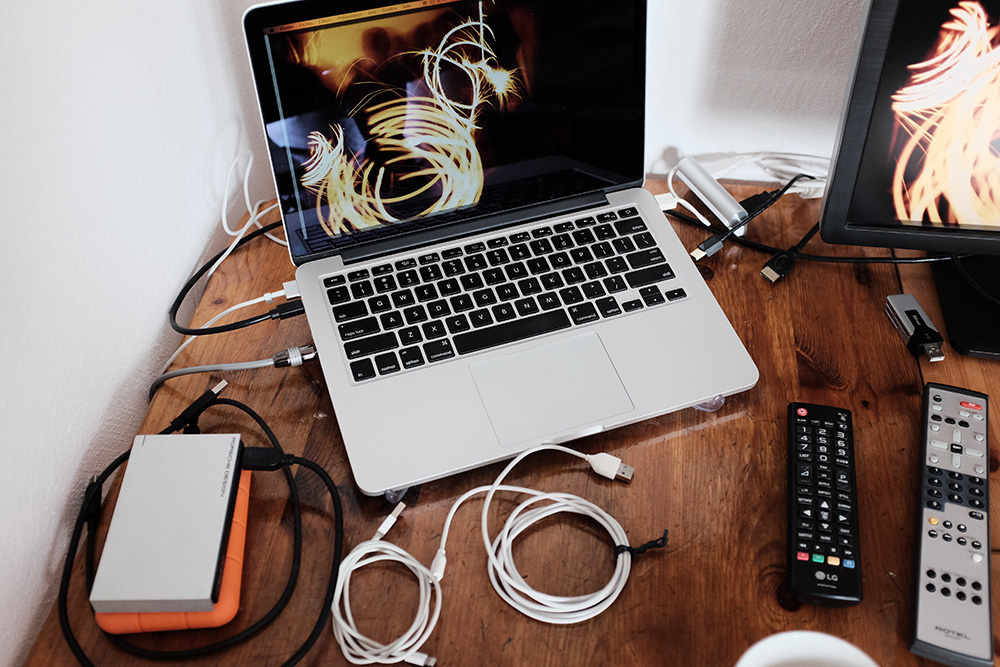 Here’s the thing - USB is a mess, and pretty much has been for at least 10 years6: 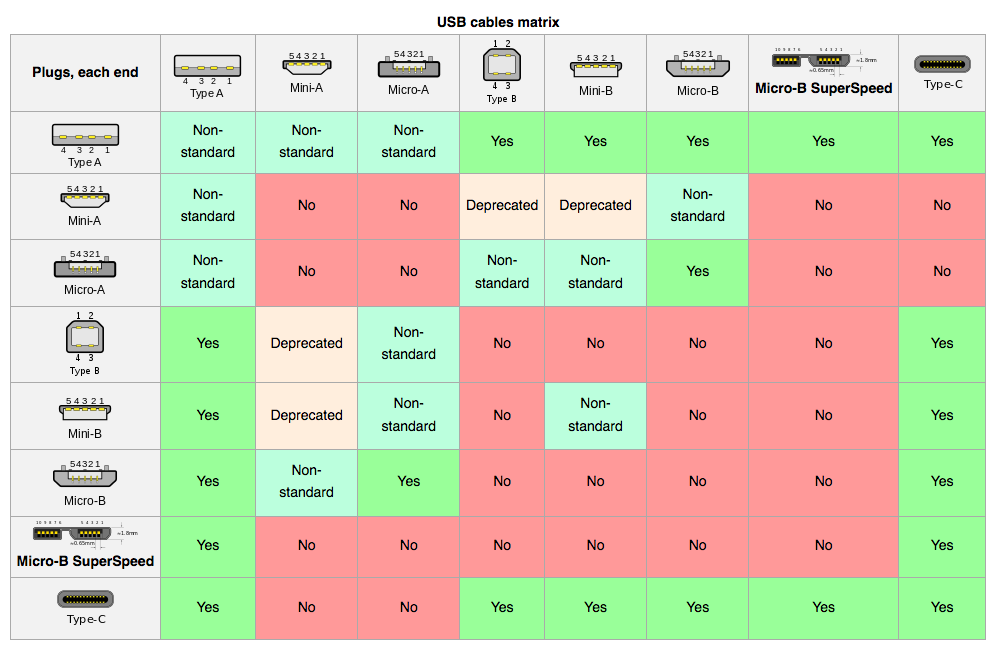 At least Apple have now standardised on one messy connectivity option rather than three (or four, or five). How many of you have a drawer full of cables so you can connect one device to another over an allegedly universal connection? The “universal” in USB isn’t what you think it is. 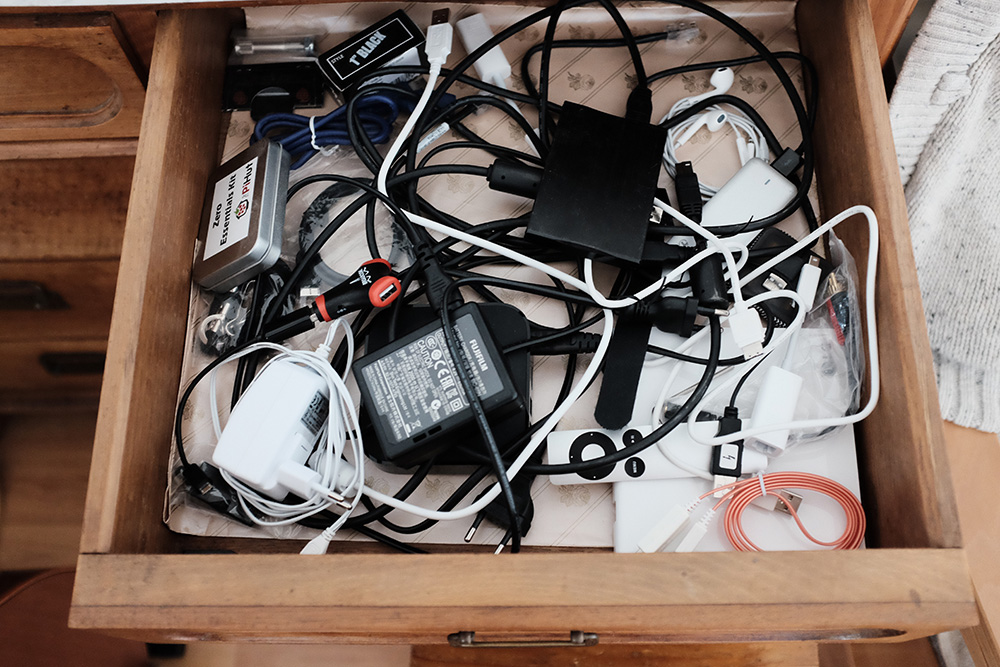 "I'm *sure* i had a cable with that type of connector"

Mine is pretty tame, look at Will’s: 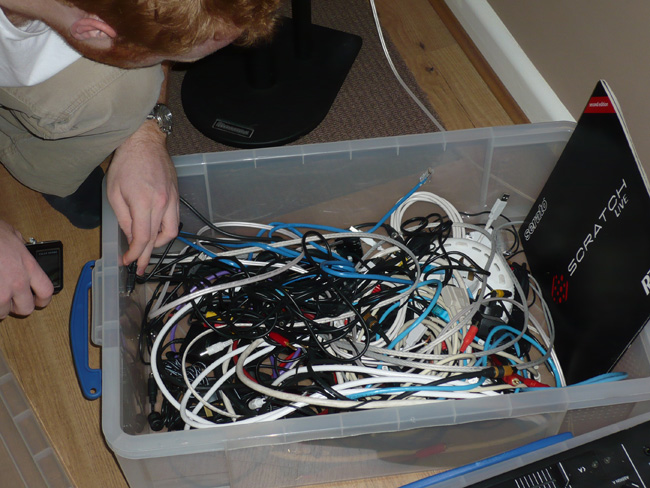 Eight years ago, imagine what this looks like now

So the reality is if you want to connect one device to another you need the correct cable, and most of the time that cable isn’t a USB-A to USB-A. So you go rummaging around in your drawer of cables to find the correct one, or find the correct combination of two. USB-C is just another set of cables in that drawer, another chapter in the connectivity mess, another great standard that will probably be deprecated sometime in the next decade.

Update: The HN thread has some useful pointers, one being that the USB-C to Thunderbolt does not support Display Port so the inevitable conclusion is that i will need a dock. I can get a Toslink to Mini Toslink so it's looking like the OWC Thunderbolt 3 Dock is the solution, at approx 300 CHF, but that still doesn't have an HDMI port. There is also this that removes the need for any adapters, at a much cheaper price of approx 100 CHF, but that still leaves me missing optical out and will not drive Display Port and HDMI at the same time.
apple, computing, photography